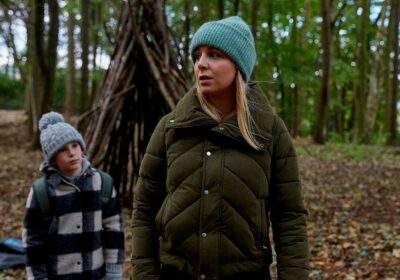 Emmerdale viewers were left baffled after Thursday's episode, as Belle Dingle (Eden Taylor-Draper) insisted on trying to ring Ellis Chapman (Aaron Anthony) instead of the emergency services after she was trapped in the woods with little Kyle.

The scene left viewers frustrated, with one tweeting: "Why would Belle not be dialling 999 in that situation if she has signal?!"

During the show's latest episode, Aaron's character Ellis invited Belle on an adventurous day out with Kyle to the forest.

However, moments before the group set up camp Ellis received an unexpected call from his ex Priya Sharma (Fiona Wade).

He proceeded to return to the village and left Belle and Kyle stranded in the forest.

In following scenes, Kyle twisted his ankle which forced Belle to make the decision that they should go back home so Kyle could be checked-on.

However, in the nerve-racking scene, Belle instantly realised her options were limited as she had given her car keys to Ellis, leaving herself and Kyle completely stranded.

With a frantic Belle trying to conjure up a plan, a struggling Kyle battled the freezing cold temperatures whilst being injured – this led to Belle smashing her car window so that the pair could find shelter and warmth from the icy temperatures.

Things continued to go pear-shaped for the stranded duo as Belle realised her phone was on low battery.

She attempted to ring Ellis but his dad, Al Chapman (Michael Wildman) silenced the call without realising she was in danger.

As the cold set in and she shivered uncontrollably, Belle left another voicemail on Ellis's phone and was about to ring Cain Dingle when her phone suddenly died – leaving fans baffled as to why she didn't ring the emergency services.

In the harrowing scenes, the pair tried to battle the icy temperatures by huddling in the car. However, it didn't take long until they appeared unconscious and pale.

Emmerdale viewers took to Twitter to voice their frustration about why Belle didn't try and contact the emergency services for help.

One furious fan tweeted: "Surely Belle could have rang someone else 999 even."

Another confused viewer said: "Why didn't Belle just send a text to multiple people telling them what's up and where she is if her battery's running out?"