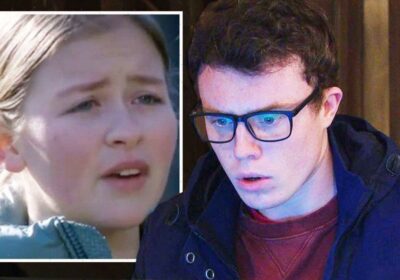 Vinny (played by Bradley Johnson) and his other half Liv (Isobel Steele) have been enjoying married life on Emmerdale, now villain Meena Jutla (Paige Sandhu) is out of their lives and his wife has been acquitted of murdering Ben Tucker (Simon Lennon). Their harmonious life together means the alcoholic has also steered clear of the bottle and her husband has been a huge help with that. However, in the coming weeks on the ITV soap, his focus could drift elsewhere as he discovers a secret from his father, Paul Ashdale’s (Reece Dinsdale) past.

The villain was killed off last year as a result of his debt and gambling storyline coming to its conclusion, which led Mandy Dingle (Lisa Riley) to discover Paul was also abusing his son.

With the character causing so much heartache and trauma for his loved ones, they haven’t spoken about him much since his death.

Rather, they have been looking to the future but the arrival of a newcomer could throw their happiness into jeopardy as they claim they are Paul’s daughter.

It has always been known Vinny’s mother left Paul when their son was very young and Mandy took on this role when she met the villain.

After he too walked away from the family home, the iconic Dingle character was forced to bring up Vinny as a single mother.

During his absence from Vinny and Mandy’s life, Paul could have had a string of romantic dalliances, all of which he saw as meaningless flings.

However, there could have been one woman who ended up getting pregnant as a result of an affair with Paul and this child could be the person who turns up in the village.

Vinny would want answers as he never thought he would have siblings out there in the world somewhere and the newcomer could try her best to explain.

She could state her mother raised her on her own and just before she died a few months ago, she told Vinny’s sister who her father really was.

After researching about Paul and his death in the news, she could have decided to visit the village to see if anyone could tell her anything about him.

Vinny’s sister might have known she had a brother as it would have been referenced in the news Paul left behind a son and wife to be.

With no parents left, the newcomer would think Vinny might be her only chance to have some sort of a family from now on but he might have different ideas.

Unable to process this life-changing news, Liv’s husband could order his sister to leave the village as he doesn’t believe what she is saying.

As he sits down with Mandy to tell her all this, she could be just as shocked to learn Paul went and had another child with someone else.

Although she would be hurt, she could urge Vinny to accept this news and make peace with it so he doesn’t lose a relationship with his sister.

Speaking with Express.co.uk and other media recently, producer for the show Laura Shaw hinted Vinny would be facing a hurdle in the coming weeks.

The soap boss said: “Liv and Vinny will get a big surprise that will impact them hugely and turn their lives upside down a bit.

“I think the stories running through the summer are very much about strengthening some of our couples and seeing them fight for what they love.

“As well as maybe pushing one or two others to breaking point,” she continued.

If the sister were to stay in the village and end up spending more time with her brother, Liv could feel left out as she feels she is not getting any time with her husband.

This could lead to arguments between the pair as neither of them would be willing to understand the other’s point of view.

As the arguing happens more regularly, it could push the beloved couple to breaking point as they feel they can’t move past this issue.

Vinny’s sister would have had no idea of the consequences her arrival would have generated but she could start to enjoy seeing the confrontation.

It could be she has inherited her father’s villainous ways and likes to cause trouble wherever she goes.

As one thing leads to another and Vinny and Liv head towards divorce, will his sister show her true colours to the village?

The actor who plays Vinny, Bradley, has spoken out about what he’s like to see in the future for his character and his wife.

Speaking to Express.co.uk and other media, he said: “Hopefully there’s a happy-ever-after for Vinny and Liv.

“After everything they’ve been through, with Liv being in prison, and Vinny with his father, it was so nice to play this happy couple.

“I think it’d be lovely to go down that path but we’ll see,” he added but will the arrival of a sister upset all of this?