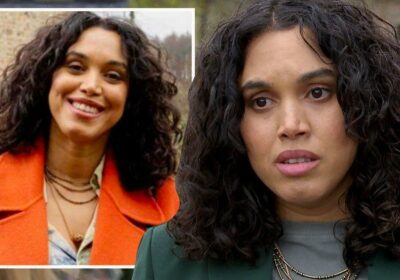 Suzy (played by Martelle Edinborough) has been struggling with her drug habit since arriving in the Emmerdale village and has been spending more time with fellow drug taker, Leyla Harding (Roxy Shahidi). However, after discovering Moira Barton (Natalie J Robb) lives in the Dales, the mother of Holly Barton (Sophie Powles) who she knew years ago. In upcoming scenes on the ITV soap, the revelation she is living in the same place Holly died shakes Suzy to the core but she could be facing the same fate as the young Barton woman if she doesn’t accept she needs to cut drugs out of her life for good.

The drama begins in next week’s episodes as Leyla ends up telling Vanessa Woodfield (Michelle Hardwick) that her new girlfriend used to know Holly.

Having questioned Suzy about this before, the village vet is frustrated her partner lied to her and begins to question whether they have a real relationship.

Contemplating whether Vanessa should be in her life or not, the newcomer ends up telling the mother of one she is better off without her.

This makes the vet think twice about snapping at her girlfriend and she ends up telling Suzy not to give up on their romance.

Later in the week, it is revealed the newcomer decided to stay in the village and continue with her romance, much to Leyla’s delight.

This is because she thinks she can continue to take drugs with her friend as she continues to romance Vanessa but she gets a shock.

Suzy tells Leyla she is going to start leading a cleaner life and is going to put her drug habit behind her.

Unfortunately, Leyla is thinking selfishly and she worries about where she is going to get her next fix if Suzy lets her go.

Needing to stage an intervention, Leyla suggests Suzy joins her and Priya Sharma (Fiona Wade) for a brunch so they can spend some time together away from work.

However, Suzy knows Leyla too well now and she can see this is a tactic to try and lure her back into the world of drugs.

My feet haven’t quite touched the ground

Suzy can’t seem to shake Holly’s overdose off her mind and wanting to make things work with Vanessa, she tells Leyla she is going to try and stay off the cocaine.

Leyla is more alarmed when the newcomer tells her maybe she should stay off the drugs as well and try to get a clear head.

Her heart is crushed when she watches her friend pour the rest of the drugs they have bought down the sink, meaning there is no chance she is going to get high that evening.

It seems Suzy is going to try and stay principled but unfortunately, this could lead to Leyla trying even harder to get her back on drugs.

If the newcomer struggles to stay away from the cocaine, she could find herself having a binge session with Liam Cavanagh’s (Johnny McPherson) wife.

Unfortunately, as one thing leads to another, the businesswoman could end up taking too much and could overdose as a result.

With Holly dying of an overdose, this could be history repeating itself as Suzy could also suffer from the same fate due to Leyla’s actions.

Liam’s wife would try to cover her tracks but the devastation would be felt all around the village as Holly’s death hit many people back in 2016.

Vanessa would be heartbroken another romantic endeavour has ended and in the cruellest way whilst Leyla would be trying to play a poker face.

However, as the guilt eats her up and she struggles to keep a lid on her emotions, will she admit she was responsible for Suzy’s overdose?

The actress who plays Suzy, Martelle, joined the soap last month and she has spoken to Express.co.uk and other media about being a part of the programme.

Martelle said: “My feet haven’t quite touched the ground yet, I’m still on this massive cloud high up in the sky, but it’s been going really, really good.

“It’s just like a family, and it sounds so cliché but it really is and everyone is so lovely and welcoming and helps you settle in really nicely.

“She’s very confident and runs her own business.

“She’s confident and gregarious and fun to be around. She doesn’t take any nonsense at the same time and she likes to get what she wants.”

“She’s a really fun character to play, so I’m looking forward to all the different stuff that’s coming up for her,” she continued.

However, it could be just a matter of weeks before the actress is making her exit from the show as her character dies.

Although it would be a fleeting visit for the newcomer, it would spark storylines for so many other characters, including Moira.

She could be haunted to learn Holly’s friend died the same way she did so how will she react to the newcomer dying under the same circumstances?