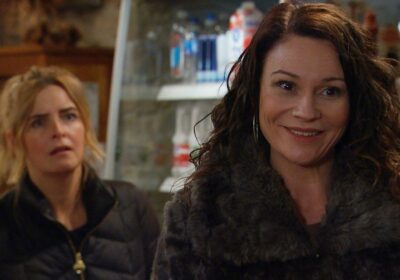 Throughout the years, Chas and Charity Dingle have come to blows a fair few times, with their latest conflict being over The Woolpack – which Charity recently bought from Chas.

However, when the cameras stop rolling on the ITV soap, Emmerdale actresses Lucy Pargeter and Emma Atkins put their characters' differences aside and actually have a lot of love for one another.

In a recent press conference with them both, the pair opened up on their close friendship, admitting that they "love each other so much," but "haven't snogged yet."

Lucy – who plays Chas – was asked if she prefers when the pair are at war or united.

She explained: "I don't want to blow our own trumpets but I think we love each other so much as people and as human beings, I don't care what I'm doing with her [Emma] as long as I'm doing something with her.

"I think we know each other so well and our performances so well that we can visualise how we're gonna do things. Even when they're arguing.

"Any heightened emotion's always good. Like the stuff where they've been pissed and falling over and singing and dancing has been just as enjoyable as the stuff when they really fall out."

Emma then added: "There's nothing we haven't really done is there?"

"I mean, I've not snogged you yet," Lucy joked.

Emma chimed in quickly with a quip of her own: "Don't give them [Emmerdale] any ideas."

The pair are set to clash harder than ever before as Chas and Mandy Dingle (Lisa Riley) join ranks against Charity ahead of her grand reopening of The Woolpack.

Determined to see her cousin's attempts at reviving the pup fall flat, Chas sets about holding her own event at the B&B to celebrate Vinny and Liv at the same time.

Chas is heartbroken, but what will she do about it?

For all the latest cast updates and juicy Emmerdale spoilers, sign up to our daily OK! Newsletter. Emmerdale continues weekdays at 7pm on ITV.