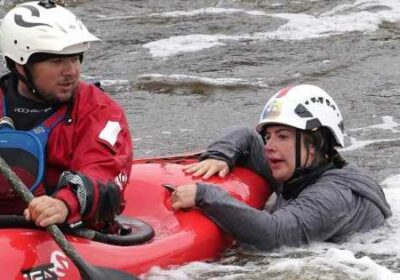 Emmerdale’s Victoria Sugden and David Metcalfe are set for some dangerous plot twists ahead as actors Isabel Hodgins and Matthew Wolfenden have been involved in some high-octane stunt scenes.

The characters have been getting closer and closer on the ITV soap, and even shared a dangerous smooch in a recent episode, as David is still in a relationship with psychotic murderer Meena Jutla.

But while David and Victoria finally admitted they have feelings for each other, Meena is well aware the latter could steal her boyfriend away, and has set her sights on the Woolpack chef.

Unfortunately, David and Victoria have no idea of the levels of evil Meena can reach to, having recently killed teenager Leanna Cavanagh, and they could be in dire trouble in upcoming episodes.

The soap is gearing up for an explosive climax to Meena’s story, but before that Victoria and David will get dangerously close to drowning as they they struggle for help down a ferocious river.

Actors Isabel and Matthew were spotted filming the intense scenes at a water sports site in Teesside.

Victoria struggled against the current when David suddenly appeared, and terrified, tried to rescue her from drowning.

A source has also said the scenes are for ITV’s Super Soap Week, which takes place in October.

“The scenes being filmed are clearly very big and from what I gathered they are for ITV’s Super Soap Week,” the insider told Metro.

“Matthew and Isabel were all there with cast and I could see there was a stunt being filmed.”

ITV has declined to comment on spoilers relating to its upcoming storylines.

Find out more about the latest gossip from Emmerdale with the OK! newsletter in your inbox every day

Fans have been airing their frustrations over Meena’s simmering storyline, with many eager for the killer to finally get her comeuppance and Leanna’s family and friends to get justice.

It was also recently revealed that Meena has killed once before, when she murdered her best friend Nadine years ago.

The twisted nurse may be finally about to claim her next victim as she sends Victoria off to her death in the treacherous waters.