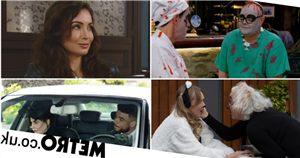 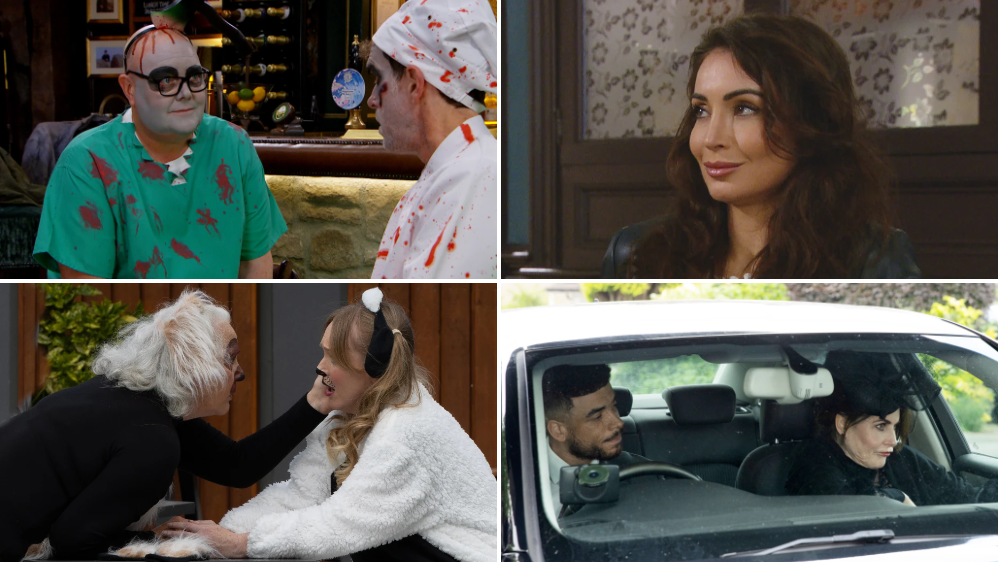 The aftermath of revelations that Suzy (Martelle Edinborough) was with Holly on the day she died, Matty (Ash Palmisciano) is determined to make her pay in Emmerdale.

Finding Leyla’s (Roxy Shahidi) stash in Take A Vow, Matty grabs them and plans them on Suzy – will her life be wrecked?

Elsewhere, Faith Dingle (Sally Dexter) is taking huge risks as she throws caution to the wind, but she too could soon have the police at her door.

And Vanessa (Michelle Hardwick) is stunned when Mary (Louise Jameson) misreads signals and kisses her.

Priya is left gobsmacked when Leyla fires her from Take A Vow.

The pressure of planning Kim’s wedding gets too much for Lydia. Leyla’s triumphant when Will asks her to pick up the pieces.

Leyla’s alarmed when Callum turns up at Take A Vow asking her to store coke in exchange for cash. With Take A Vow’s financial worries growing, Leyla knows she’s crossed a line when she calls Callum to accept his job.

Will’s worried when Dawn can’t seem to get over losing Clemmie. He suggests she call Social Services to check up on her, leaving Dawn determined to do just that. Later, Billy’s surprised when Dawn reveals that Alex is Clemmie’s father. Knowing this means Alex was with Beth behind her back, Dawn’s furious at the betrayal.

Chas is suspicious when glammed up Faith heads out with Nate. Faith remains tight lipped when intrigued Nate questions what they’re up to.

Outside an anonymous house, Nate’s left uneasy as Faith explains her plan to take back something that belongs to her from her step daughter’s home. Nate’s beyond awkward as Faith blags her way inside Angus’s house despite his suspicions at the door.

Angus is outraged when he figures out who Faith really is and demands she leaves. Nate’s left exasperated by his enigmatic grandmother when Faith vows to return for what’s hers.

Leyla’s uneasy when Callum turns up with a bag of cocaine much larger than she agreed to store. She’s unsure of what to do when Callum pays her extra. Later, Suzy’s surprised to see Callum outside Take A Vow and asks him if Leyla’s still scoring. Gobsmacked Matty watches from afar, convinced he’s witnessing a drug deal.

Leyla lies through her teeth when Suzy asks if she’s back on cocaine but Suzy is suss when Leyla insists she’s kicked the habit. Later, as Matty secretly searches Take A Vow, he’s shocked to find a large holdall of cocaine. Panicking, he grabs the holdall and darts off.

Dawn’s tearful knowing Clemmie and Lucas need to be together. Dawn’s shocked when Billy tells her he’s phoned social services to say they want custody of Clemmie.

Dawn’s grateful for Billy’s change of heart but isn’t hopeful when social services make it clear they’ll need Alex’s consent to get custody of Clemmie. Dawn knows Billy’s right when he’s clear that they need to at least try.

Matty is determined to make Suzy take responsibility for her actions. He’s happy with himself when takes the opportunity to plant the holdall full of coke in Suzy’s car. As Rhona’s hen party in the Hide gets underway. Matty’s simmering to see that Suzy has attended as well.

When irate Matty berates her, Suzy knows she isn’t welcome and she leaves. As Suzy drives off, Matty calls the police and reports the drugs he planted in her car…

Nate outright refuses to help Faith when she plans to go back to Angus’s. He kicks himself when Faith steals his car and drives off. Later, Angus is bamboozled when a disguised Faith turns up claiming to be a photographer for a real estate agent. Faith has a eureka moment when he lets her in. Cain and Nate can’t believe their eyes when they see Faith darting out of Angus’s with a stolen bag.

Recognising Nate from the other day, Angus figures out the thief must be Faith. Later Faith reflects on a good day’s work when Chas, Cain and Nate are chuffed with the box of memories she’s stolen back. Cain and Chas reminisce about their childhood as they search through Faith’s box of memories. As the group falls into laughter, Faith is left happy after a successful day.

Paddy’s worried when exhausted Marlon falls asleep at his stag do but he has a plan.

Dawn and Billy meet Alex at the prison. Alex’s taken aback when he finds out they know about Clemmie. Dawn’s upset when Alex outright refuses to let her and Billy foster Clemmie. When Billy blasts Alex for his decision he changes his mind. Dawn is relieved but they worry if Alex can be trusted when they notice his smug smile.

Mary opens up about her sexuality to Vanessa but Mary mistakes her kindness for something else and leans in to kiss her.

Rhona’s heartbroken when her mum opens up to her about what happened with Vanessa.

Will Faith’s actions come back to haunt her?