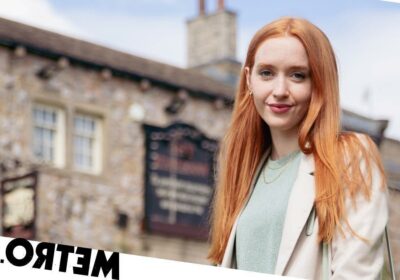 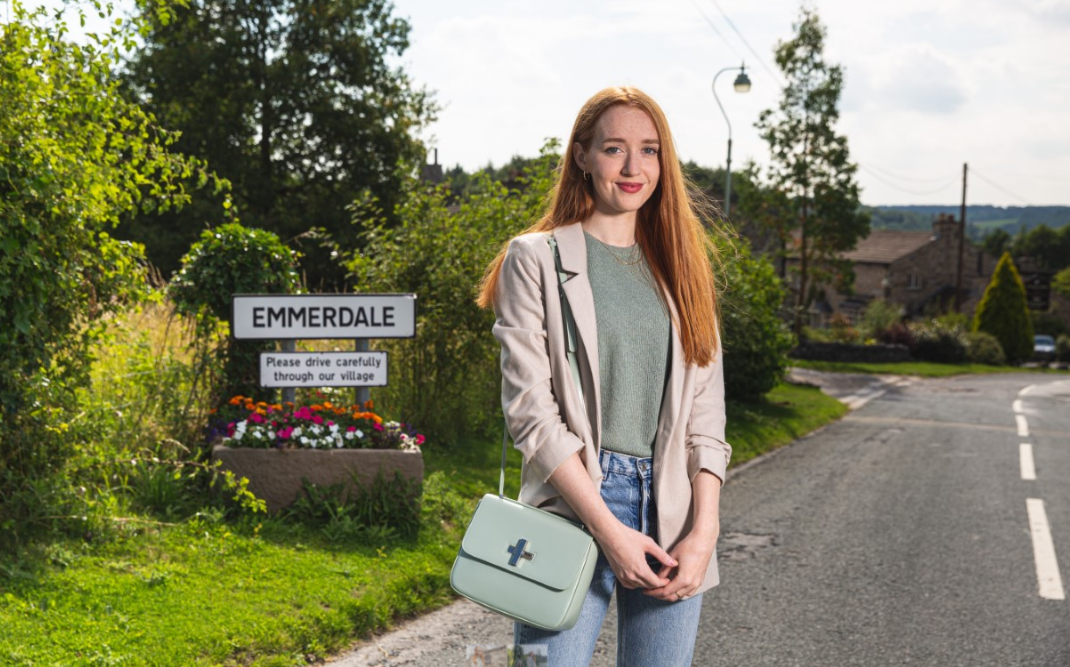 Sarah Sugden’s (Katie Hill) search for the family of her donor finally bore fruit tonight when she came face to face with their sister Chloe.

Emmerdale has cast Jessie Elland in the new role, and here she teases a rocky road ahead for Sarah and Chloe.

She also chats about what we can expect from Jessie and her experiences so far of joining the hit soap.

Welcome to the show Jessie tell us how you found out about the auditions for the role of Chloe?

I couldn’t be happier to be a part of Emmerdale. My wonderful agent who I’ve been with for just over a year rang me back in May to tell me I had an audition for Emmerdale.

How did the audition process work?

The initial audition was a self-tape that I filmed at home with my Mum (who insists it’s down to her acting prowess in that tape that I got the part). Then a week later I was asked to come into the studios for a screen test. It was my first ever in-person audition (which I tried not to think about at the time) but I had the best day. I was lucky enough to be doing a scene with Karen Blick who is a fantastic actress to work with and so lovely! Then a few weeks later I got the phone call from my agent to say I had been given the part!

What were your first impressions when arriving at the studios?

The first time I set foot in the Emmerdale studios all I could think of was how it reminded me of a very complex and detailed IKEA! All the sets are next to each other in a huge maze of rooms and I was in awe at the attention to detail in each set.

Did you go shopping or have a costume meeting?

My costume fitting was something I was looking forward to from the off and it did not disappoint! Jodie and the rest of the team at Emmerdale are so talented and I’m so jealous of all of Chloe’s outfits!

Tell us a bit about the character of Chloe?

Chloe is very sweet and genuine, eager to please and make connections with people, but underneath it all she is struggling with a lot of sadness, anger, and frustration. Her experiences in life have made her old beyond her years, but I think this has given her a sense of determination to go out and get what she wants.

How similar/different to you?

At first Chloe struck me as being quite different to myself; she seemed a lot more naive, vulnerable, and super sweet (not to mention the fact she drives about in a huge shiny car and has a seemingly endless supply of Swarovski bracelets). But as I have got know and explore the character I can see more similarities. I think we both really value sisterhood; Chloe was very close to her sister Gemma and there’s an almost sisterly dynamic that develops between Chloe and Sarah, I think I have a determined streak like her too.

Is Chloe just as interested to meet Sarah who has her sister’s heart as Sarah is to meet the donor’s family?

I think that while Sarah sought out her donor’s family out of interest and a want for closure, Chloe’s reason for looking for Sarah came more from a place of desperation. She is desperate to talk about Gemma, about all the memories she has of her, something she has been denied by her family. I think she also wants the reassurance that something good came from something so awful.

Does Chloe feel overwhelmed by it all?

For sure! Chloe goes into the first meeting with Sarah with a lot of expectations, worries, and questions, she places a great deal on this meetup which puts a lot of pressure on both herself and Sarah. Then to top it off the meeting doesn’t go as expected which leads her to experience an even bigger mix of emotions. Luckily, I think her and Sarah are able to form a friendship that helps ground them a little.

Have you had to change your appearance for you role?

Luckily the team at Emmerdale were happy to let me keep my hair its natural colour – dark hair is not a look I could pull off with all my freckles!

Are you excited to be playing this role?

I couldn’t be more excited and honoured to be playing Chloe, I found the character really striking from the first script I read. She was so well written I felt like there was a lot of work I could be doing and I really wanted to put that work in and do the part justice.

So you are from the North East – Yarm. did you go to theatre school?

When I was 16 I won a scholarship to study at the local private school where I did my first musical. I’ve known for a while that I wanted to pursue acting as a career and doing that musical definitely sealed the deal for me! Drama school wasn’t really an option so I went to the University of Manchester to study Anthropology and audit their Drama course, though after a week I decided to switch to Drama full time. It was a very theory based course which I enjoyed, but I made sure to get involved in as much extracurricular drama/acting as possible. I took a few classes at MSA and met the fabulous Karen Henthorn who is a fantastic teacher and friend and who helped me put together a showreel with Manchester Actors Platform and get my agent!

Chloe will soon form a friendship with Noah. Are you enjoying working with both Katie Hill and Jack Downham?

Katie and Jack have both been so lovely and welcoming from my very first day. Most of my scenes so far have been with Katie who is fab, she inhabits the character of Sarah so well and with such ease – it’s amazing to watch and work with!

Will you be watching with your family on the first night you are on screen?

My family planned a big viewing party as soon as I got the part, which I’m simultaneously looking forward to and dreading! But the whole process has been such an amazing learning curve already. I’m excited to learn even more from seeing my scenes on TV!