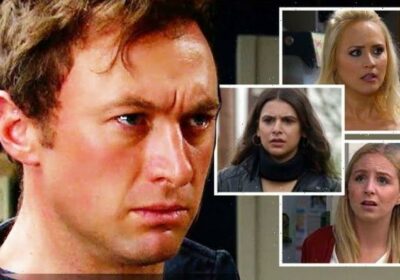 Liam (played by Jonny McPherson) has been taking some time to grieve for his daughter, Leanna Cavanagh (Mimi Slinger) over the last few months after she was murdered by Meena Jutla (Paige Sandhu) earlier this year on Emmerdale. The father-of-one has no idea the nurse he works with was behind the youngster’s death as the police ruled it as a tragic accident. He has been busy putting his efforts into creating an allotment space in the village, giving him a welcome distraction from his thoughts of sorrow. However, as his daughter’s killer becomes slightly more unhinged in the lead up to Christmas on the ITV soap, it seems he could end up getting her pregnant.

The drama kicks off a few days before Christmas as Meena discovers her love interest, Billy Fletcher (Jay Kontzle) wants to give things a go with his ex-girlfriend, Dawn Taylor (Olivia Bromley).

Having been dumped by David Metcalfe (Matthew Wolfenden) a couple of weeks ago, the villain is furious at the news.

Instead of walking away gracefully, she informs the young man she is pregnant with his child and he is left stumped by the revelation he is going to be a father.

However, the killer is known for spouting lies and it is very likely she is making the whole thing up to try and keep Billy in her life.

This means to make the story believable, she needs to become pregnant and this is where she could play Liam to her advantage.

After telling Billy the news, Meena sees Liam staggering from the Woolpack where he has been drowning his sorrows as it’s his first Christmas without Leanna.

The villain has shown no sort of empathy over what she did and purely sees the doctor as just another villager she has to lie to.

In such a way where he doesn’t realise what he’s doing, the killer escorts him back to her bedroom where he will spend the night.

If they don’t use protection, this is how the villain could end up getting herself pregnant and keeping up the pretence with Billy.

That’s potentially going to be her downfall

Of course, when Liam wakes up the next day in Meena’s bed, he will feel immense guilt as he will know he has cheated on his wife.

However, with his duties having been completed, the villain could become quite cold towards him as she doesn’t care about him, particularly.

Though she would tell him to not say anything to Leyla as her plans to make Billy believe the baby is his would go up in smoke.

She could hold their night together as leverage, saying she won’t say anything if he agrees to keep his mouth shut.

Parting ways, Liam might try to put the night he spent with his daughter’s killer to the back of his mind as he tries to carry on with his life with Leyla.

Unfortunately, when he hears Meena is pregnant, his world could come crashing down around him as he knows there is a chance the baby is his.

The villain could reassure him it isn’t his and Billy is the child’s biological father, but will the doctor fall for this?

When the child is born, he could ask Meena to carry out a DNA test to find out the truth, to which she will try and forge to make it seem Billy is the father.

Finally letting the problem go, Liam could have no idea he actually gave a child to the woman who murdered his daughter in cold blood.

When the truth does come out about Meena and the baby, will he struggle to accept the child is his given who its mother is?

Appearing on Wednesday’s edition of Loose Women, the actress who plays Meena, Paige, hinted her character will get her comeuppance soon.

The soap star explained: “Yeah, so, because Meena’s caused such a crazy amount of stuff that’s happened in Emmerdale, she’s starting to get this feeling of invincibility.

“And that’s potentially gonna be her downfall – because her behaviour is getting more and more outlandish and people are starting to cotton on.

“I can’t tell you whether there will be any more murders or not, but she definitely gets worse – like really worse,” she continued.

She also spoke about trying to get into the mindset of a serial killer for the role.

Paige added: “I love the research side of acting. I’m also really interested in biology and the science of how people work, so it was really interesting to me to figure out why a psychopath is different from you and I.

“Why can they not feel the same spectrum of emotions that we can? It really helped inform why Meena acts the way that she does.”

Viewers are becoming irate at the fact Meena is continuing to get away with murder, with Aysha writing: “Don’t think I can watch anymore until I read somewhere that the Meena storyline has played out.”

The Lauri and The Ivy commented: “Is #Emmerdale still playing silly beggars with no one realising Meena is an utter psychopath, or can I start watching again?”

Leonie shared: “Can someone let me know when the Meena storyline in @emmerdale is done cos I’m so bored with it. Not watching anymore. It’s tedious. Sorry, #emmerdale.”