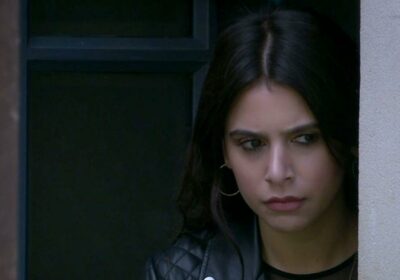 Emmerdale fans have already started to predict Meena Jutla's downfall on the ITV soap after Ethan's mother Esme made a surprise appearance on Thursday's episode.

During the latest instalment, Charles met up with Esme, who had been contacting him recently, as she revealed that he has a secret daughter, as well as their son Ethan.

And fans have already predicted that the storyline could tie into Meena's downfall as earlier this year the "evil" character pretended to be Ethan's long-lost mother, who walked out on her family years ago, in a hurtful scheme.

During the meeting on Thursday, Charles confronted Esme about the alleged messages saying: "You messed up with him yet again."

To which a confused Esme asked: "Again?" with Charles replying: "Don't play naive! You messaged him, built up all his hopes, only to disappear all over again."

With Esme insisting: "What are you talking about? I haven't messaged Ethan!"

Soap watchers were quick to speculate that now with Esme back on the scene, Ethan will realise that his mother never sent those messages and it was in fact Meena.

Taking to Twitter, one viewer wrote: "And now the cracks begin in Meena's downfall. Hopefully Ethan, will be more alert than Victoria, when he finds out that his mother Esme, didn't send those messages. #emmerdale."

While a different account added: "It was Meena who messaged Ethan not her Charles #Emmerdale," followed by worried emojis.

Elsewhere during the meeting, Esme, who walked out on her family years ago, let slip that they also have a daughter together called Naomi.

Esme emotionally said that she was suffering from postnatal depression at the time and that she put their daughter up for adoption, she also dropped the bombshell that Charles had an affair during their relationship.

Charles was left stunned by the news, espcially when Esme handed him a letter and asked to see their son.

At the end of the episode, Charles confided in Harriet Finch as she encouraged him to show Ethan the letter.

However, he got angry at this suggestion as he snapped: "Say nothing, I mean it Harriet!"

It comes after Emmerdale released a chilling new trailer involving Meena ahead of the ITV soap's explosive autumn stunt week.

In the spoiler video, it teases danger for several of the village's residents as Meena, played by Paige Sandhu, warns: "There's no way out."

During the chilling trailer, it sees several of the village's residents trapped in a maize maze as a cover of Britney Spears' Toxic is played over the top.

It starts with David Metcalfe frantically searching for Victoria Sugden, who Meena has been threatened by as she has feelings for her boyfriend, as he yells: "Vic!"

Also caught up in the maize maze is Priya Kotecha and Ellis Chapman, Charles Anderson, who is looking for Andrea Tate, Meena's sister Manpreet Sharma, and Mackenzie Boyd and Charity Dingle.

Emmerdale continues on weekdays at 7pm on ITV.

For all your updates on Emmerdale, sign up to our daily OK! newsletter.