Emmerdale fans were baffled by tonight’s final scene which saw Amelia Spencer (played by Daisy Campbell) collapse on the floor, metres away from her father, Dan Spencer (Liam Fox) who was also unable to move from the gravel after twingeing his already injured back. Many spotted a plot hole, whereby garage owner Cain Dingle (Jeff Hordley) wouldn’t have allowed a minor to work on the premises. Is Dan and Amelia’s situation going to get much worse?

“I’ll have to watch out, Cain will be offering you my job – especially if he sees me sitting down here like this! ” Dan joked.

“I wouldn’t mind if he did. I find it quite good fun,” Amelia replied. “Don’t you like your job?”

“Of course I do, but it’s not what I want for you. You’re a proper whizz kid, turn your hand to anything,” Dan explained.

Amelia then went into the garage to pick up a surprisingly light car battery and placed it under the bonnet. 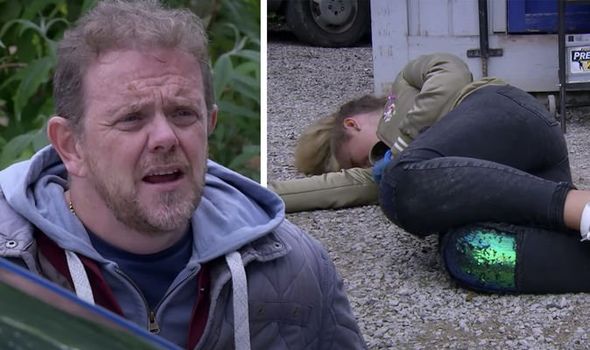 “You could do anything you put your mind to, think about your career, study and go to uni.”

“Do I have to do it now? I’m in the middle of something,” Amelia said. “I’ll probably just get a job to help pay rent.’

“Don’t you go thinking like that,” Dan warned. “I’m not having you sacrificing your life for me. If you want to go to uni, you can go to uni and get loans or grants – don’t have to think about money.

“And besides, I’ll be back on my feet in no time.”

“I hope so. Anyway, what’s next?” Amelia asked and Dan said she needed to “sort the clamps out”.

But the camera was on the side of the bonnet which was slowly sliding it’s way down to shut.

“It’s fine, I can manage,” the teenager responded as she put her head back underneath the bonnet.

As it slammed down, Amelia fell backwards and Liam lurched up, twisting his back.

Emmerdale fans saw Amelia lying on the floor screaming out and Liam writhing in agony as he lowered himself onto the ground.

“Dad, I’ll go get your chair,” she managed to say as she got up.

But she ended up back on the floor with Liam calling out her name.

Those watching at home were not convinced by the scenes portrayal and took to Twitter to comment.

“#emmerdale Haaaaaaaa Was that supposed to be a serious scene? Comedy hour,” one asked.

Another said: “#Emmerdale From bad to worse in one scene, absolutely pathetic and so bad it’s not even laughable.”

“Don’t really get what happened there the bonnet closed and sent Amelia flying backwards? #Emmerdale,” someone questioned.

One tweet remarked: “How many 999 calls have just been reporting 2 accidents at a garage? #emmerdale.”

Others commented on the likelihood of a young teen working or even helping out in a garage considering the health and safety risks.

“I saw that coming. That was a disaster waiting to happen. Amelia should not always offer to help Dan all the time. She is literally taking over his life. If Dan had listened in the first place then this would not of happened  #Emmerdale,” a fan wrote.

One mentioned: “Oh dear, I don’t think Cain is going to be very happy when he finds out a young girl has been working in the garage. #Emmerdale.”

“Why would anyone let someone untrained work in a garage Dan you are a moron #emmerdale,” someone chimed.

A fourth added: “Worst garage ever, everyone in the village has worked there, now the kids are having a go. #emmerdale.”