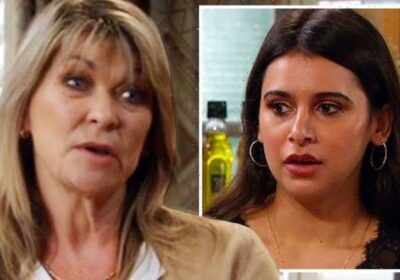 Meena (played by Paige Sandhu) claimed her most recent victim in last week’s stunt episodes, with Emmerdale favourite Andrea Tate (Anna Nightingale) being killed off in a blazing maze fire. With the police launching a murder investigation earlier this week after establishing the cause of death, the ITV soap villain has been desperate to ensure she won’t get caught. Enter Kim (Claire King), who became her unwilling pawn in Wednesday night’s episode but if the Home Farm socialite discovers the truth about the betrayal, she could very well turn into a murderer herself.

The drama began in the latest edition of the weeknight serial drama as Meena discharged herself from the hospital and was escorted home by her sister, Manpreet Sharma (Rebecca Sarker).

At this point, Meena has been trying to get her hands on Priya Sharma (Fiona Wade) as the villain knows she might have seen something in the maze.

Knowing there is a chance she could be caught out, it was no surprise to her when the police started asking questions.

She played the sweet and innocent village, who was completely naïve to what was going on, despite telling them she was walking around the maze aimlessly.

Needing them to get off her scent, she used her ammunition of dropping Kim’s name into play as she knew it would make sense she had a reason to kill Andrea.

“I’d hate to get someone into trouble,” she told the police officer, reminding him she “wasn’t a witness” to anything which happened in the maze.

Asked what she did witness, Meena explained: “An argument between Andrea and someone else. I suppose if you don’t hear it from me, you’ll hear it from a million other people.

“Kim Tate hated Andrea. She was her daughter-in-law. With her son Jamie [Tate] gone, Andrea was going to make sure Kim never got to see Millie [Tate], her granddaughter.

“They had a massive row about it and this was the day before she died at the base camp. Andrea took out a restraining order against her.

“Kim was furious. She threatened her. Kim said ‘You’ll need more than a restraining order to protect you’.”

I’d hate to get someone into trouble

Falling for Meena’s lies, the police officer left the villain to it but by the end of the episode, the authorities came to arrest Kim.

She was left in disbelief someone was accusing her of murdering Andrea, telling the police her arrest was “ridiculous”.

“You are making a big mistake,” she declared before telling Gabby Thomas (Rosie Bentham) to call her a lawyer.

With all eyes now pointing at Kim, it seems Meena might be able to get away with murdering a second villager.

However, if there is no evidence to suggest the Home Farm owner did anything to Andrea, she could be seething to find out who betrayed her.

Kim knows she has several enemies in the village but one person who hasn’t crossed her as of yet in malevolent Meena.

With her focus on needing to be there for her granddaughter Millie Tate (Willow Bell) and the grandson Gabby is carrying, she will make every attempt to silence her enemy.

As she begins to piece the puzzle together, she could realise it was actually Meena who killed Andrea and framed her for the murder.

The villain has shown a few psychopathic tendencies and she would enjoy the thrill of being caught out and claiming another life.

Taking down the Empress of Emmerdale would certainly be a feat to add to her long list of murders but she might be the one facing death.

The owner of Home Farm has had her fair share of trouble in the past and knows when she needs to launch ammunition to defend herself.

If she fears Meena is going to kill her, the villain could shoot her nemesis down and remind her who is the badest woman in the village.

This would bring an end to Meena’s time in the village as her reign of terror is finally brought to an end.

The next mystery would be if Kim would alert the police she killed the woman who betrayed her or whether she would hide the body.

Ruthless and rotten to the core, the businesswoman could make it seem Meena has fled the village for pastures new following the breakdown of her relationship.

The actress who plays Meena, Paige, has discussed how she thinks it would be very easy for the residents of Emmerdale to realise she is the killer.

Discussing Meena’s trophies, the soap star said: “I think her greatest weakness in terms of her getting caught is the fact that she has this fascination with when she’s killed someone when she’s committed that crime, she needs to still be involved in it.

“She wants to take complete ownership of that crime and so watching people’s reaction to that death and taking the token and being around those people.

“She’s normally very clever and the fact that she’s taken tokens from people and keeps them in a box and keeps herself around those people isn’t very clever.

“She’s like a moth to a flame and she can’t draw herself away from that fire, even though it will eventually burn her.”

So could the fact she has Andrea’s bracelet be a key clue for Kim bringing her down?