Emmerdale exit for April Windsor as she flees village after Marlon’s mistake? 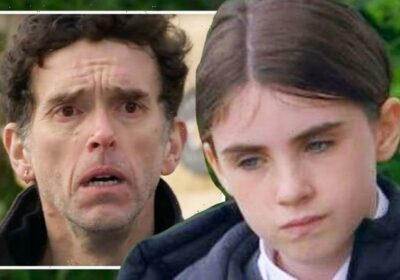 April (played by Amelia Flanagan) has been struggling lately on Emmerdale following the cyberbullying storyline she was the victim of earlier this year. The youngster has begun to close herself off from people, believing she is not a nice person after the comments Cathy Hope (Gabrielle Dowling) was sharing on social media about her. However, as her father Marlon (Mark Charnock) tries to make it a Christmas to remember, it seems his eagerness to help his daughter could prove to be a big mistake in the festive episodes of the ITV soap.

Over the past few months, Marlon and his friend Bob Hope (Tony Audenshaw) have tried to help their daughters reconcile as they were once friends, too.

Each attempt has proved fruitless, with Rhona Goskirk (Zoe Henry) and Brenda Walker (Lesley Dunlop) even attempting to help the girls make peace.

Again, this hasn’t worked but as Christmas Day dawns in the Dales, the two men believe a festive miracle could happen.

They both get their daughters to meet up on the festive day and hope the pair of them will speak about their problems.

However, this could result in more difficulties than first thought as April fails to move on from the ordeal she was put through.

Cathy taunted the youngster over the death of her mother, Donna Windsor (Verity Rushworth), and this has left April heartbroken as she has had to process her grief all over again.

Unable to move on from the cyberbullying and with Marlon constantly making the mistake of bringing the girls together, April could take action.

Packing her bags, she could decide to flee the village as the rest of the residents settles in to continue the Christmas Day celebrations into the night.

When Marlon wakes up the next day, he could realise his daughter is missing and will begin fretting as he has no clue where she has gone.

With no note left and no explanation as to where she has gone, the father of two would ring the authorities to start an investigation.

It is going to run and run

Unfortunately, this could be the last time viewers see April as she could make a permanent exit from the village by moving abroad.

With Marlon unable to contact his daughter, he might never get any answers as to where she has gone and how her life turned out.

Not only would he blame himself, but his friendship with Bob could be on the line as he turns on him and young Cathy.

The chef could blame the pair for the heartbreak they caused his daughter, so much so, she has had to leave her family and will never speak to them again.

As he tries to move on with his life, will Marlon have to go through the grief of never seeing April again, the last thing he had to remind him of Donna?

The actor who plays Marlon, Mark, has previously spoken out on his thoughts about April’s latest storyline and the torment she is going through.

Mark said in an interview with the press: “It is going to run and run because these things don’t go away overnight.

“They are insidious and poisonous – and the psychological after-effects can be dreadful for kids and for parents too.

“Obviously you have to be cautious with this kind of story and do it right and tell its truth. So it does run and run.”

“As we all know, it’s extraordinarily common – too common. We all talk about it on social media but on it continues, on it goes, and people continue to bully.

“So the only way forward is for us to keep talking about it. That’s why it’s important shows like Emmerdale do these stories, to keep flagging it up.

“Because we talk a good game as a society about how this is awful and we’ve got to stop it, but it doesn’t stop. I think it’s an important story.”

Could the conclusion of the storyline really be April’s exit from the village for good?

Taking to Twitter, fans watching the storyline unfold at home have been sharing their thoughts on how this could pan out.

Jamal wrote: “Cathy needs to know its gonna take time for April to accept her apologies, and be her friend. You were nasty to her, and you made her think you had her back #emmerdale.”

Orit shared: “April knows that Marlon is just trying to be a good dad but how sad that she doesn’t like herself anymore because of the bullying #emmerdale.”