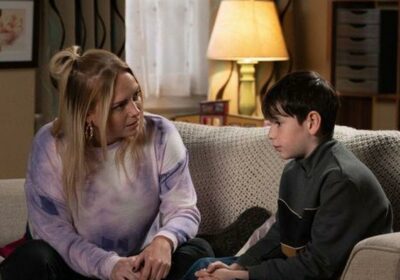 It comes just days after the young lad was exposed as Al Chapman's real killer.

Cain Dingle (Jeff Hordley) is currently spending time behind bars in a bid to protect his son from time in jail.

Amy has been struggling to come to terms with the fact her little boy shot her mother Kerry Wyatt's (Laura Norton) partner in recent scenes.

During Wednesday's (November 9) episode, Amy received a phone call from Kyle's school to pick him up early.

Matty Barton (Ash Palmisciano) agreed to look after the youngster and they ended up playing a video game.

A gunshot triggered Kyle and reacted badly, lashing out at the fact his dad was behind bars for shooting Al.

Amy ran into the room and instructed Kyle to tidy his bedroom.

As Matty left the house, Amy shouted up to Kyle to pack "anything he couldn't live without" as she made a phone call.

She arranged transport to the airport as soon as possible, meaning that the pair will be fleeing the village.

Amy mentioned about her and Kyle leaving the village in recent scenes but Cain's partner Moira Barton (Natalie J Robb) managed to talk her out of it.

Moira did her best to reassure Amy that Kyle was better off staying at the house with her, and running away would be a bad idea. Amy seemed to be won around by Moira's vow to stand by her and her plan to keep Kyle's secret under wraps.

As the moment ended the women hugged it out, while Amy pulled a face that suggested she was still contemplating leaving.

Emmerdale spoilers have also revealed that Moira will also be leaving the village in upcoming dramatic scenes.

Moira pays another visit to Cain in prison next week, where he's being held on remand ahead of his sentencing.

The farm owner worries Cain by insisting that she's not cut out for the lies.

Fans will have to wait and see who leaves and who stays to continue the lie.