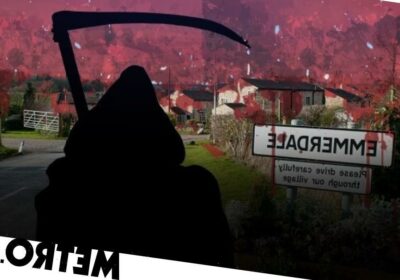 Emmerdale cast are in the middle of filming some pretty creepy looking night shoots – but what’s going on?

Kevin Mathurin – who plays vicar Charles Anderson in the ITV soap – posted a series of images on his Instagram in the middle of the woods at night.

The dense woodland looks incredibly spooky but unfortunately, Kevin hasn’t posted any snaps that include any possible hints to future storylines – damn!

But could Charles be a part of a new plot that sees Malone’s body finally discovered?

His body is currently buried in the land Kim (Claire King) owns, and the truth was very nearly exposed during Survival Week when Ellis (Aaron Anthony) and Priya (Fiona Wade) insisted their base camp was on the same ground where Malone’s body is hidden.

Could it be Malone? Or is Charles searching for a body following another murder by Meena Jutla (Paige Sandhu)?

A spokesperson for the show revealed all, saying:

‘The Emmerdale villagers awake to a thin dusting of what appears to be snow on Christmas morning but is all as it
seems? Soon we flashback to the hours that preceded this flurry and understand what really happened.’

‘It’s the season of good will, but the underhanded Al Chapman (Michael Wildman) goes sparing on dishing out any joy, particularly when he is feeling under so much pressure.

‘Christmas Day at the Dingles is usually a happy family celebration but recently divisions have formed in this clan. With Sam Dingle (James Hooton) desperate to make things better, can he reunite them at this time?

‘The sense of a threat from within the Village still looms large, but it is now Dawn (Olivia Bromley) who needs to watch her back? But could there be other villagers in danger before the week is over?

‘As the dust clears it is soon apparent this will be a Christmas the villagers will never forget, leaving some things changed forever.’