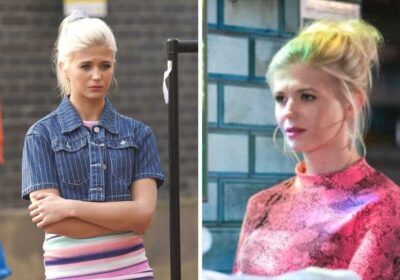 Danielle Harold became a familiar face in 2011 after she landed the role of Lola Pearce on BBC’s long-running soap EastEnders. Sadly she could soon make a shock exit after it was revealed the actress was upset when bosses informed her of her character’s upsetting fate.

Lola Pearce (played by Danielle Harold) was first introduced to viewers as an extension of the formidable Mitchell family, as the granddaughter of Billy Mitchell (Perry Fenwick).

Throughout the years she has had a number of unforgettable storylines which left fans speechless.

This includes a teenage pregnancy after a one night stand with her gay cousin Ben Mitchell (Joshua Pascoe).

However, it looks as though fans could soon be forced to say goodbye to the character after it was revealed bosses were planning her exit.

Fans could soon see one last major storyline with Lola as her departure could leave shockwaves in Albert Square.

Lola leaving Walford is a part of executive producer Chris Clenshaw’s plan to shake up the show with a number of explosive twists over the summer.

According to The Sun, an insider revealed: “Dan was in pieces. The cull came out of the blue.

“She was not expecting the chop because her character has been a firm favourite with viewers, she’ll be written out with no option to return.”

They shared that the 30-year-old actress had met with bosses to discuss her contract as she had just six months left.

With the expectation of an extension, she then received the bad news.

The insider continued: “Danielle was teary but was told a number of the cast were being shown the door.

“No one else has been given their marching orders yet however the rest of the cast are rallying around her.”

In addition, the source stated: “She handled the news like a true pro and is eager to throw herself into the storyline.”

The character had recently received terrible news after she learnt her boyfriend Isaac Baptiste (Stevie Basula) would not be returning to Walford.

After going to Trinidad to visit his mother Sheree Trueman (Suzette Llewellyn), it was revealed he had met someone else and would stay in the Caribbean.

This came as a huge blow for Lola as she had supported Isaac after his schizophrenia took a turn for the worse.

Although it was revealed Basula had filmed his final scenes when viewers saw him leave in March.

His character had promised Lola his departure was only temporary while his mum recovered and he would be back.

While Lola was gutted and heartbroken, she found herself entangled in her ex Jay Brown’s (Jamie Borthwick) relationship with Honey (Emma Barton).

This came after she accused him of cheating on Honey with barmaid Frankie Lewis (Rose Ayling-Ellis).

While there is no official confirmation from EastEnders, fans will have to stay tuned to see if Lola will make a shock departure.

EastEnders is available on BBC iPlayer.