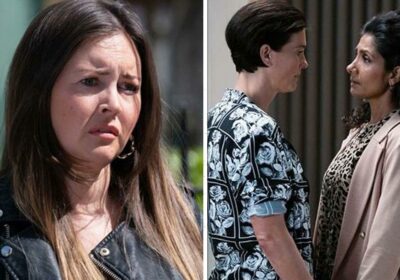 EastEnders’ Stacey Slater’s (played by Lacey Turner) suspicions continue to grow over the actions of her ex-wife Eve Unwin (Heather Peace). The Walford veteran can only look on as Eve continues to make her mark on the newcomer to Albert Square. Her actions also have a rippling effect on the whole Panesar family too on the BBC soap.

Official spoilers for the long-running show indicate Suki Panesar (Balvinder Sopal) is in for a lot of mental strain after her fling with Eve continues to make her life very difficult.

Suki has asked Eve to keep her distance and sacrificed her own happiness in order to keep Eve at bay.

The Panesar matriarch also made the decision to protect Eve from her murdering husband too, but her plan has not worked.

Nish served 20 years for the murder of Suki’s male friend, someone who he believed got in the way of their marriage.

Last week, Nish made the threat that he’d kill again if it meant protecting his relationship with Suki.

After this revelation, Suki has so far tried and failed to keep Eve at arm’s length.

Eve is determined to win her back but is using some very risky tactics along the way, including trying to become allies with her love rival.

This alarms Stacey who confronts Eve on her new mission and lets her know in typical Stacey fashion how she does not like where it could lead to.

However, Eve is unperturbed by Stacey’s word of warning and continues her plot with the dangerous killer.

Eve previously gave him business advice and even alerted him to the dodgy actions of his former lawyer.

She continues to pursue his company and they agree to a lunch with the pair of them and Suki too.

While they enjoy their lunch, Eve uses her expertise in law to raise some eyebrows with Nish.

He praises her knowledge after receiving further business advice and seems genuinely impressed.

This dynamic was always going to lead to stress for a struggling Suki, who is later accosted by Ravi Gulati (Aaron Thiara).

He spots how nervous and tense Suki is around Eve and prods her for more information on why this is.

Coiled like a spring, Suki eventually snaps at him when he brings up the plans for Ranveer’s (Anil Goutam) funeral.

The family have another row in Walford East and a turbulent Suki leaves the restaurant.

Meanwhile, Nish adds another layer to the strain on Suki’s mental wellbeing as he asks why she is avoiding him.

He exacerbates matters when telling her his plans to go away on a business trip together.

Unsurprisingly, Suki rejects the offer and decides to stay in Walford, much to Nish’s disappointment.

What revelation will the Panesar family find out first?

Will Eve’s actions lead to disaster for both her and Suki?

EastEnders airs Monday to Thursday at 7.30pm on BBC One and BBC iPlayer.