Home » TV & Movies » EastEnders spoilers: Katy is terrified as Mick prepares to take her down

EastEnders spoilers: Katy is terrified as Mick prepares to take her down 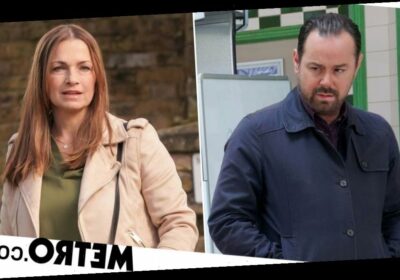 Simone Lahbib has spoken about her character Katy Lewis on EastEnders, saying she is terrified as Mick Carter (Danny Dyer) prepares to take her down.

The emotional New Year’s Eve episode of the show saw Mick remember that Katy groomed and sexually assaulted him when he was just 12 and she was his trusted care worker.

After coming face to face with her in Walford over recent weeks, Mick’s memories of the abuse came to light, and caused him to contemplate suicide. Now, Katy and Mick are set to have a huge showdown, with Mick finally confronting her.

Speaking about the pair coming face to face, Simone spoke about her character’s worries.

She said: ‘Katy is cornered when Mick arrives and the audience were able to see just how dark and nasty she is. I remember just before going on set, I had a moment, thinking about the scene I was about to do and its importance.

‘I looked up at the red light in the studio and felt such a thrill and gratitude to have such a great job and a complex character to play, especially during these times. It felt like standing in the wings waiting to go on stage with all that adrenaline. I really care about the storyline, it’s so important and I hope that it raises awareness.’

Simone also spoke about the moment Mick confronts Katy by turning up at her house. She said: ‘Straight away as soon as she opens the door, Mick had a look in his face that you just know. The fact that he’s come to her house, something he hasn’t done before too, so she knows that there’s trouble ahead.’

Simone revealed that Katy is soon fearful of Mick, as the character seeks revenge.

‘She’s worried when she sees that strength in him, that’s the thing that she’s been trying to break down since she first appeared on the Square.’

The actress added: ‘The more broken down Mick is, the more empowered she feels so that moment flips it all on its head and Katy is the one that becomes fearful. But with Katy there will always be another plan, her sense of survival is immense.’

EastEnders airs on BBC One.