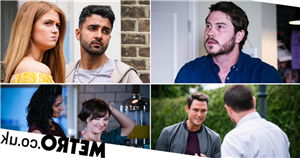 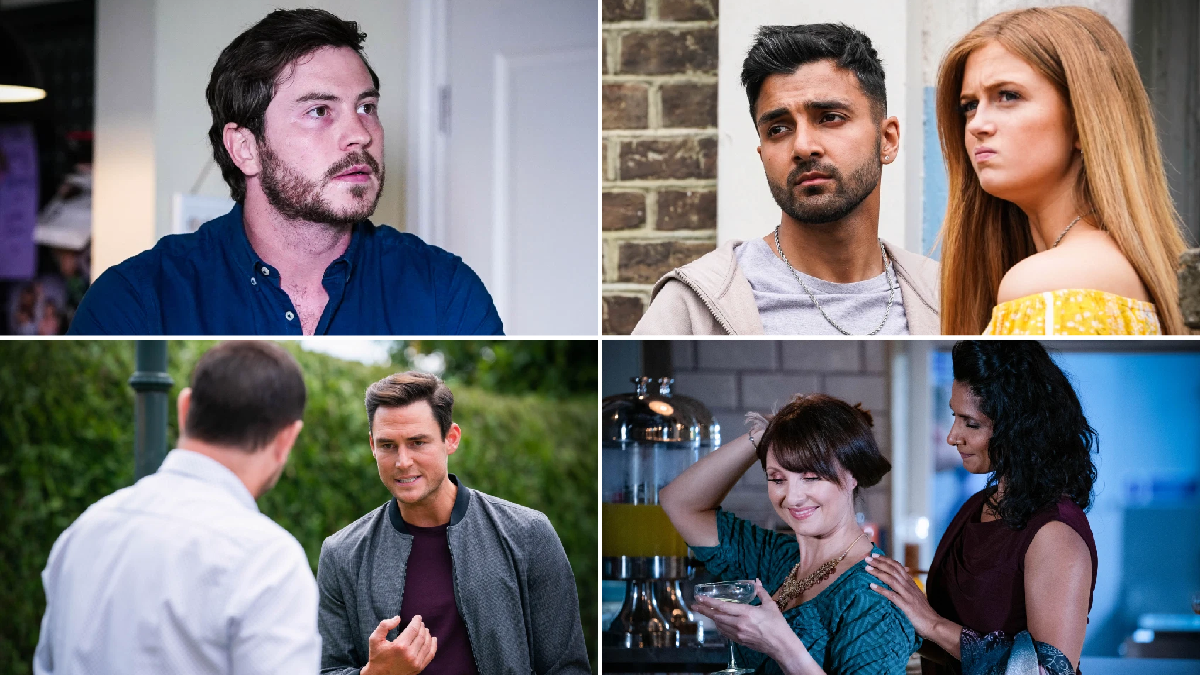 EastEnders fans have been hoping and praying that Gray Atkins (Toby-Alexander Smith) will get his comeuppance, but it appears as if his downfall is a long way off.

The serial killer does, however, receive shocking news this week when he learns from boss Laura Awoyinka that he’s been fired! But how does he retaliate? With a cruel lie, of course, as he tells Shirley Carter (Linda Henry) that he saw dead Tina (Luisa Bradshaw-White) on a bus!

This information drives Shirley to confront Phil Mitchell’s (Steve McFadden), ordering him to hand himself in to the police for his role in Ian Beale’s (Adam Woodyatt) attack!

Phil refuses, but Sharon Watts (Letitia Dean) is riddled with guilt, and contemplates going to the cops.

It’s all kicking off in Walford next week, and here’s all you’ve got to look forward to!

Gray’s boss Laura arrives on his doorstep with a HR rep to inform him that he has been fired due to the caution he recently received. Livid, an irate Gray confronts Chelsea for making purchases on his credit card. Chelsea, however, shows no signs of regret, telling him that his financial issues are not her concern!

Gray heads to The Vic and tells a stunned Shirley that he saw Tina on a bus!

Sheree wants to take Isaac to Trinidad, with no return date in mind. Isaac is not keen on the idea, and Patrick supports his son.

Vinny spends time with Tiffany, and it’s not long before he spies an opportunity to take revenge on Keegan.

Kheerat is not pleased when he learns that Vinny has gone into business with Phil. Suki, meanwhile, rages with jealousy when Ash interrupts her dinner with Honey.

Ash fails her performance review at work, and she lashes out at Suki, claiming it’s all her fault. Suki offers to buy a property and turn it into a GP surgery so that Ash could work there, but Ash is not keen.

Honey defends Suki, and later they both get dressed up and attend the Pride of Walford Awards.

Mick and Shirley ask Gray to tell them everything he knows about Tina. Gray, however, backtracks, claiming that he can’t be sure it was Tina that he saw on the bus.

Shirley promises Mick that Sharon and Phil will be going down if they don’t confess about their plan to murder Ian.

Sheree schemes in order to make Isaac see that he should go to Trinidad, while Nancy suggests to Zack that they should go into business together. Zack, of course, is taken aback and riddled with guilt.

Tommy is disappointed when Kat reveals she cannot look after Scarlett.

Phil returns, and Shirley wastes little time in confronting him, telling him to hand himself in for what he did to Ian. Afterwards, she pleads with Sharon to go to the police.

Nancy reveals to her family that she’s planning to go into business with Zack. Mick is not pleased, and vows to put a stop to it.

Patrick has a change of heart, suggesting that Trinidad could be the best place for Isaac, and offers to go with him and Sheree!

The Queen Vic landlord warns Zack to stay away from Nancy, but Zack points out that they’re both lying to her. Mick seethes and lashes out, punching Zack across the face, and afterwards, he tells Frankie they must come clean to Nancy out the car accident.

Ash apologises to Suki for the way she reacted over her offer.

Sharon opens up to Phil, revealing that she feels guilty over what they did to Ian. With both Linda and Shirley pressuring her, it’s clear she considers going to the police, but Phil reminds her that she could face prison time if she does.

Later, Phil struggles to get hold of Sharon. He leaves her a message, ordering her not to do something stupid.

Tommy begs Kat to help Scarlett, as her court hearing could result in her being placed anywhere.

The footballer then asks Martin if he knows where Alfie is, hoping that he could live with Alfie and Scarlett.

Frankie has enough, and decides to tell Nancy the truth.