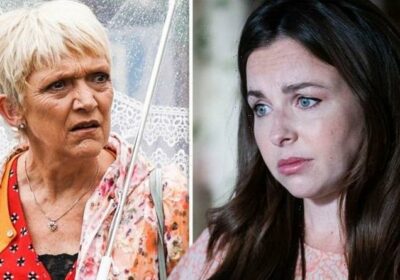 Ruby Allen (played by Louisa Lytton) was warned by Jean Slater (Gillian Wright) to tell Martin Fowler (James Bye) the truth about her framing Stacey Slater (Lacey Turner) or suffer the consequences. The club owner is desperate to keep her marriage together but will she find herself in grave danger when her lies come back to haunt her?

EastEnders boss Kate Oates has teased Ruby will meet a “sticky end” on the square.

She told Express.co.uk: “Jean is intent on bringing Ruby down and on clearing Stacey’s name.

“Ruby is going to come to a slightly sticky end! It’s fun to see how that plays out.”

Tragedy has followed the club owner and one of the reasons she’s desperate to have a child of her own is because she has no family of her own.

Ruby’s father gangster Johnny Allen (Billy Murray) died of a heart attack in prison while her mother and sister died in a house fire.

Will the club owner suffer the same fate as she rushes to keep Martin in the dark?

When Martin hears his former mum-in-law is back on the square he rushes over to her.

He’s certain she’ll come clean about her cancer diagnosis but she seems distracted and orders him to leave.

EastEnders viewers discover Jean is horrified to discover the marijuana in the garage didn’t die while she was away.

In fact, the plant is now out of control and she has no idea what to do with the accidental drugs den she’s created.

When Martin comes homes, Ruby’s convinced Jean has told him everything but instead, he explains he was chucked out.

She’s relieved but panics when Martin reveals he’s more convinced than ever that something’s seriously wrong with Jean.

The pair put a plan in motion while Martin tries to reach out to Jean again.

However, he’s distracted when he gets a call from Lily’s (Lilia Turner) school.

Ruby heads over to Jean’s and is intrigued when she hears a commotion from the garage.

She’s convinced she can smell something unusual but they ignore her and she leaves.

Back at home, Martin tells Ruby Lily was caught with weed at school but the schoolgirl insists she was given it by a classmate.

Jean bumps into Ruby and announces her time is up and she’s telling Martin the truth.

EastEnders spoilers confirm the club owner makes a huge decision that could have disastrous consequences for Jean.

However, Martin is determined to help Jean and Ruby’s vendetta against her could be her undoing.

Will he catch Ruby trying to harm Jean and finally discover the truth?

EastEnders air on BBC One on Mondays, Tuesdays, Thursdays and Fridays.