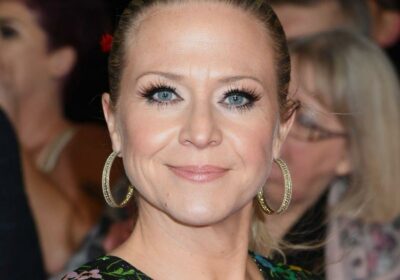 The 44-year-old is a famous face on the Square, having been accused of trying to murder Stuart Highway and the long-term wife of Danny Dyer’s character Mick.

The duo have been through plenty of trials and tribulations together, leaving their marriage on understandably rocky footing.

But Kellie’s life away from the cameras is a far cry from Linda’s drama-filled existence, as she’s firmly loved up with hubby Paul Stocker.

The couple exchanged vows during an intimate ceremony in Cornwall back in 2014, attended by various members of the EastEnders cast and crew – including Danny Dyer.

They tied the knot in the tiny hamlet of Trelill.

Paul, too, has a star-studded career – and has even popped up in EastEnders.

He appeared as a police officer who was tasked with interrogating Bobby Beale over the. murder of his sister.

He’s also appeared in Casualty and Doctors, along with the hit film Atonement starring Keira Knightley and James McAvoy.

But Kellie has discussed her fears about the couple’s seven year age gap previously, as she fretted Paul would “resent” her if the age difference affected their family plans.

She told OK! Magazine: "Reality kicked in. I was 31 and wanted to have kids, and Paul was 24 and didn’t at the time. I felt it wasn’t fair on Paul – I worried he’d resent me."

The couple now have two children together, Freddie, nine, and Gene, four.

But right away Kellie knew she didn’t want to stop there, telling OK! after Gene’s birth: "I said right away in the delivery room that I wanted another baby!

"I don’t feel ready to shut the door on motherhood just yet. But if we do have another one, it won’t be immediately."

And now the couple are expecting their third child in August this year, conceived through IVF.

Kellie slammed critics who lashed out at her for having her third child aged 44, and during an interview said that if she “was a man […] no-one would bat an eyelid."

"Don’t forget my husband is much younger than me. He's in his thirties, so he's still running around after the kids, which is great. We met when I was 31 and I didn't want to jump straight into having kids," she continued.

Reflecting on her rushed labour last time, Kellie admitted she came close to giving birth in the car.

"I was so uncomfortable in the car and the contractions were coming quite quickly by that point," she said.

"But of course it was school run time so we got stuck in traffic. When we arrived at the hospital, a midwife could see I was in established labour and took me straight to a delivery room. About 20 minutes after our arrival at 9am, my waters broke!"