Viewers know that Ian (Adam Woodyatt) has been desperate to rekindle his former romance with Mel ever since she returned to Walford – seemingly undeterred by her upcoming wedding to Ray.

When a conversation with his friend Alfie Moon leaves him with renewed inspiration where Mel is concerned, Ian will pull out all the stops tonight as he tries to woo his ex-wife once more. 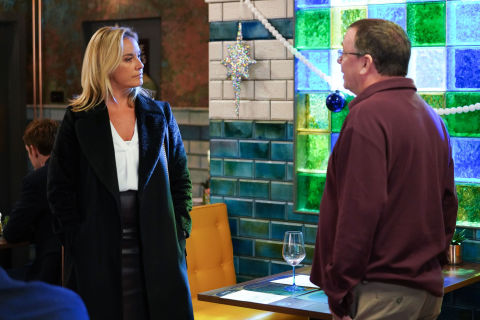 Unsurprisingly, it’s not long before Ian’s grand plan starts to go horribly wrong when Ray turns up unexpectedly and interrupts his evening with Mel.

With everything falling apart thanks to Ray’s arrival, a furious Ian soon diverts his attention on getting his own back on him instead.

Taking action, Ian exacts his revenge on Ray, but what does he have planned? And will it work, or is he simply setting himself up for another fall?

EastEnders airs these scenes tonight at 8pm on BBC One.

Digital Spy Soap Scoop video – hit play below for all the latest EastEnders spoilers, as Jean threatens Alfie over his baby secret and Mel makes another discovery about Ray.