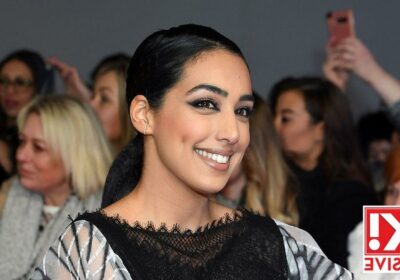 We know and love – or sometimes love to hate – their characters on screen, but now it’s time to discover all the behind-the-scenes secrets from our favourite soap stars.

In our exclusive interview, Soap Stars Coming Clean, OK!'s finding out all the juicy gossip about what happens when the cameras stop rolling, as well as the actors’ favourite memories with their co-stars so far.

We recently caught up with EastEnders actress, Gurlaine Kaur Garcha, who plays Ash Panesar, to chat about her close bond with her on-screen family, why she wants reality royalty in Albert Square, and how she once interrupted David Beckham when he’d just got out of the shower.

What’s your favourite memory on EastEnders so far?

It’s a bit of a sad, then happy one. I lost my dog last November and I was dreading going into work. I didn’t know how I was going to get through the day, and I kept thinking, “what if I start crying?” But it just cemented how much the cast are like family and so lovely, kind and caring. I ended up having the funniest day as we were filming the scene where Peter Beale [played by Dayle Hudson] ran around the Square naked. The whole day was me and Lacey Turner [who plays Stacey] stood on some stairs laughing. Dayle was having a nightmare, it was hilarious.

Who are you closest to from the cast?

I filmed a lot with Dayle, we get on really well. I’m also close to Louisa Lytton [who plays Ruby] who has just had her baby, I’m so happy for her. But I’m closest to my on-screen family, especially Shiv [Jalota, who plays Vinny]. He’s like my little baby brother. We’ll call each other and talk about our personal life. I’m like the big sister giving him advice – and then telling him off!

Does the family dynamic continue behind the scenes?

One hundred per cent. We’re really lucky that we feel it off screen as well. It’s just such a natural thing for us. The banter between me, Shiv and Jaz [Deol, who plays Kheerat] is like sibling banter. Then you’ve got Bal [Sopal, who plays Suki] who puts us in our place and says, “guys, stop it!” or, “that’s not very nice.” So we really do have that family dynamic and it makes it so nice.

There’s always banter with Jaz, Bal and Shiv. I also just filmed a little bit with Harvey, who is played by Ross Boatman, and instantly we clicked. He’s so funny. And Tameka [Empson, who plays Kim] always makes me laugh. It’s so off the cuff with her – she just comes out with stuff and you think, “that’s so funny.”

What’s the best night out you’ve had as a cast?

A group of the younger cast went for drinks near work and for a meal afterwards. I organised it, it was our first time getting together and it was so fun. It reminded me that you don’t have to film with everyone 24/7 to build those friendships.

What do you always have in your dressing room?

I’m notorious for snacks, fluffy blankets and fairy lights. My on-screen family, especially Shiv and Jaz, always say, “your room is so nice” because I spent time making it a really comfortable space. It’s really zen. There’s been times when I’ve not even been on set and Jaz has asked if he can use my shower as mine is so much nicer than his. The only people that have my doorcode is my family because I gave it to them in case they need to use it when I’m not there.

Which famous face would you love to see doing a guest role?

I’m a bit late to the party but I’m finally watching Homeland and I’m obsessed with Claire Danes. And I recently rewatched Friends and started following Courteney Cox on Instagram, so it’d be between those two. I might have to slide into their DMs! Although Kim Kardashian tends to get obsessed with soaps, so I think we need to throw EastEnders her way…

If you could play another character on EastEnders, who would it be?

Janine. I’ve always loved her. She’s an incredible character and there’s so many layers to her. She’s got that evil side, but she’s also got a loving side too. And she has a cold side, but she also has a family side. What an amazing person to be able to play.

If you weren’t in EastEnders, what soap would you like to be in?

I’m told that I look like Olivia Junkeer from Neighbours all the time. I get people saying, “you guys are twins. You look exactly the same.” So we’ve actually reached out to one another as she gets it as well. We said we could swap and nobody would know. I can go and do a mean Australian accent and she could come to EastEnders and do a British one, or we could even play long-lost sisters.

Even with my mask on, people recognise me and shout out in the middle of the supermarket. I always tell my mum and dad, “if you can see that someone might recognise me, don’t be the proud mum and dad and tell them it’s me” – but both of them have!

If you weren’t an actor, what would you be doing?

I’ve always wanted to do so many different things. When I was younger, I wanted to be a tennis player and I fully thought I was going to be at Wimbledon. Then I wanted to be a 100 meter sprinter, or to join the police. But, as I got older, I worked in fashion and also TV production, where I worked my way up to be a researcher on The Graham Norton Show.

Wow, what an amazing job! Who was the biggest star you met?

It was incredible to meet so many people from Will Smith to David Beckham. We knocked on his door and he’d just got out of the shower with a towel on. I went bright red because I thought, “I’ve just interrupted David Beckham as he’s got out of the shower!” But 50 Cent was my childhood love. When I was in year five at school, I cut out his picture and stuck it on my folder, so meeting him was amazing.

For all the latest soap interviews and spoilers, sign up to OK! newsletters here.

EastEnders is on BBC One on Monday, Tuesday, Thursday and Friday as well as BBC iPlayer