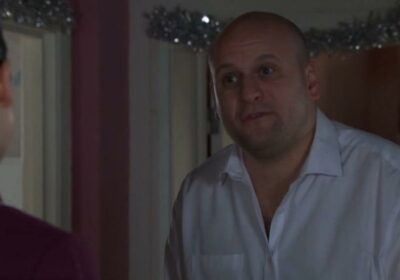 EastEnders fans have predicted that Stuart Highway and Sonia Fowler will get together as she supports him through his cancer journey.

The expectant father was devastated when he was diagnosed with the male form of breast cancer and couldn’t help but let off some steam when he got drunk at the Queen Vic.

Luckily, his close pal Sonia was there to help him pick up the pieces as she took him home late at night where he opened up to her about his recent diagnosis.

After taking the time to sleep on the life-changing news, he looked for some added support from the local nurse to help him through the process.

But throughout the episode, Rainie couldn't help but notice a spark between the two as she spotted the pair leaving the train station together as they shared a loving embrace.

And she wasn't the only one who noticed the instant connection between the pair as fans swarmed to Twitter to share their thoughts on a budding relationship between the two.

One viewer theorised: "Sonia wants Stu by the look on her face" as another agreed: "Sonia and Stuart could get together I feel."

A third questioned: "You think Sonia and Stuart are going to get together at some point? I saw a spark."

Luckily, viewers fears were put at ease when Rainie questioned her deceitful husband about a possible affair with Sonia after she spotted him kissing her hand outside of the train station.

It was at this point that a pamphlet about breast cancer which fell out of his coat pocket as she started to rummage around through his coat looking for his phone to see if he had been cheating on her.

Insistent on keeping his illness from his wife, Stuart said that he was supporting Sonia through the early stages of Breast Cancer as a friend.

Viewers couldn't help but feel sorry for Rainie as she continues to believes the lies Stuart has been telling her.

One user pointed out: "To be fair can't blame Reenie for thinking Stuart and Sonia are having an affair looking at the train station without knowing what's actually happening."

Another chimed in with: "Omg Rainie thinks Sonia has cancer. It's the other way around.

A third questioned: "Surely you'd rather tell Reenie the truth rather than have her believe you've been with Sonia?"