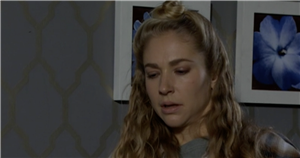 Sharon Watts (Letitia Dean) asked Nancy if she could look after her young son Albie for a couple of hours.

She reluctantly agreed and began to feel unwell while looking after the tot.

Nancy quickly puts Albie in his crib and called her dad Mick Carter (Danny Dyer) just in time before she crashed to the ground.

Viewers praised Nancy for putting Albie's safety first despite being so unwell.

Taking to Twitter, one fan penned: "It’s the fact that Nancy put Albie back in the crib so he wouldn’t get hurt."

Another added: "Poor Nancy, it must be awful having epilepsy. Glad she put Albie somewhere safe as she could feel a seizure coming on."

A third person posted: "She put Albie back in his crib cause she knew what was coming and wanted to know he was safe and wouldn't hurt himself whilst she passed out."

Mick thankfully got to his daughter in time and Nancy came around.

The pair later discussed her plan to be sterilised and Nancy asked Mick to attend her next hospital appointment.

While Nancy plans to not have any children, EastEnders spoilers have recently announced that her mum Linda (Kellie Bright) will begin to expect she's pregnant.

The BBC One soap started dropping clues about Linda's pregnancy a few weeks ago when the show revisited her pregnancy craving for apples and saw her admit she was having mood-swings.

Actress Kellie Bright who has played Linda since 2013, announced back in March that she's expecting her third child with husband Paul Stoker, after undergoing IVF.

Speaking about her IVF journey, the 44-year-old star told OK!: "I want to be open and honest about this, because I think it's important for younger women to understand.

"But for a lot of us it doesn't work that way, so I wouldn't suggest leaving it late by choice."

Will Nancy go through the procedure or will her parents change her mind?

EastEnders airs Mondays, Tuesdays, Thursdays and Fridays on BBC One