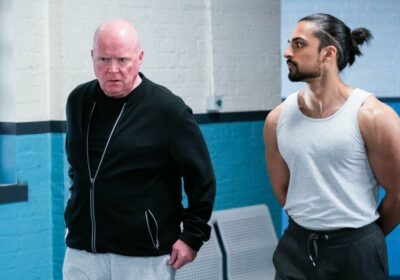 EastEnders fans believe they have worked out who really murdered Jags Panesar after he was killed off in 2020.

During Wednesday’s (August 10) visit to Walford, viewers were left reeling after it was revealed Suki Panesar (Balvinder Sopal) may have killed Ranveer Gulati when he was trying to assault her in an unexpected twist.

Luckily Ranveer’s son Ravi Gulati (Aaron Thiara) sided with Suki when he walked in on the aftermath and agreed to help her clean up the murder scene.

But now fans of the BBC One soap have been left with a sneaking suspicion that he may have ulterior motives for helping her hide the body.

It was later explained in a second twist that he finished off his father for good before he realised Suki had a hidden camera filming the entire brutal encounter.

Now viewers are convinced that the terrifying newcomer was the real person who killed Jags two years ago.

After watching the heart-racing episode fans flooded to Facebook to share their thoughts about the suspicious character online.

One user shared their lengthy soap theory online as the TV hunk causes chaos in Albert Square days after his arrival.

It read: “I think Ravi is playing a game with Suki, the fact is she needs any help she can get to cover up for her so he is grabbing the opportunities to help her.

“When Ravi was in prison with Phil he was asking Phil to get Ben to hack Kheerat Panesar's laptop. RED FLAG. This has to be deeper!!!!

“I think Ravi is going to act nice and kind to Suki now and then turn on her to get her to give details on Kheerat. I also think Ravi wants to start his own empire in the square.”

Fans of the long-standing show soon flooded to the comments where they shared their thoughts on his murderous activities and speculated as to whether he is Kheerat’s half brother.

One viewer penned: “I think he killed Jags and that he is Kheerat’s half-brother and wants to take over all of his businesses.”

Another agreed: “I think he killed Jags in prison. He may be half-brother to Suki’s kids. I think he’ll try and frame Kheerat for his dad’s death because Kheerat held the clock.”

A third chimed in with: “He may have killed Jags but I'm sure we saw the people entering his cell when he was killed. He was helping her because he finished him off, he knows if he went to the police stories wouldn’t match as he was hit twice by a heavy crystal clock.”