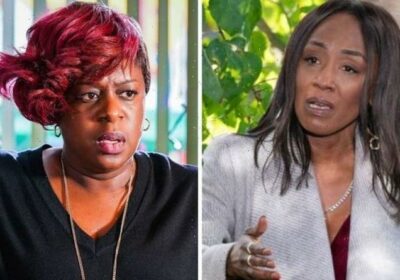 Ever since, Kim (played by Tameka Empson) has been after answers. Little does she know that her own sister Denise Fox (Diane Parish) was told by Phil Mitchell (Steve McFadden) that Vincent had been killed on Aidan Maguire’s (Patrick Bergin) orders. The EastEnders thug even showed Denise a harrowing video of Vincent’s murder. When Kim finds out in upcoming episodes of the BBC soap that Denise has lied to her, could she leave Walford for good?

The determined mother tells Denise she’s getting donations on the page she created for her.

Denise, who was given money from Phil, feels guilty.

She later offers to make a contribution for her niece with some money she got from the salon, but Kim refuses to touch Phil’s money.

This ends up sparking an idea for Denise, who takes matters into her own hands.

Soon after, Denise gives Kim the happy news that Pearl has been offered a scholarship.

However, her partner Jack Branning (Scott Maslen) sees through Denise’s lies and realises she is secretly behind it.

He promises her that Kim never has to find out.

Café worker Kathy Beale (Gillian Taylforth) soon puts her foot in it though while chatting to Kim.

A reflective Kim is encouraged by Jack to look to the future and find closure.

The business owner decides to visit the scrapyard but bumps into Howie Danes (Delroy Atkinson).

Viewers will remember Kim met Howie while she was trying to trace Vincent recently before she discovered he had died.

She found Howie was using Vincent’s name as an alias and had some of his belongings.

When she spots him again, she pleads with him to talk to the police and Howie admits he was threatened not to talk.

When he goes on to give a description, Kim realises it’s none other than Phil behind the threats.

Kim’s bound to be furious and if she finds out Denise has been listening to Phil all along, she could see it as the ultimate betrayal.

It’s also likely she will find out the truth behind why Pearl was suddenly able to attend private school.

Unable to accept her sister’s lies, will Kim and Pearl leave Albert Square for a new start?

Kim will probably take Jack’s advice to get closure, but this might now include space away from her family too.

When Phil first tried to stop Kim from digging into Vincent’s whereabouts, he used Denise to influence Kim.

“For all you know, he could still be out there,” she told him back in October.

Denise snapped: “And why didn’t you tell me this three years ago? You said he was alive.”

“I only found out myself during lockdown,” the gangster explained.

He continued: “You need to shut her down.

“Believe me, you don’t want these people to come looking.”

When she saw the clip of Vincent’s death, Denise agreed to try to stop Kim in order to protect her son Raymond (Michael Jose Pomares Clixte).

When Kim finds out Phil and Denise have been shielding her from the facts, will she decide to make an exit?

EastEnders continues on Monday at 8pm on BBC One.