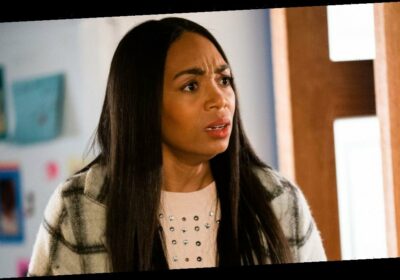 Zaraah Abrahams is best known for starring in EastEnders as Chelsea Fox – but her life away from our TV screens is even more glam.

Tough nut Chelsea might have found her softer side in the BBC soap, but Zaraah leads a lot more relaxed life – at least according to her Instagram page.

The 34-year-old star enjoys getting out in nature, regularly posting pics of her kitted out in hiking gear for a stroll in the great outdoors.

In one chic photoset, Zaraah wears a slate grey coat and cream knitted hat for a stroll in the woods.

The ground is dusted with snow, though the winter sun glints through the trees.

Zaraah’s latest post features her clutching a steaming cup of coffee, and is simply captioned with a love heart emoji.

She looks snug as a bug as she sips her drink in what appears to be a back garden, and has paired a brown knitted hat with some peach lipstick for the intimate snap.

And in a series of other pics, the EastEnders star shows off her outfit of the day in a full-length mirror.

In one posted last year, she’s paired her usual hat with a comfy white hoodie, sweatpants and trainers in true pandemic chic, jokingly captioning the snap: "Fashion by 2020".

And in another, Zarah opted for a mustard roll-necked jumper over some dark leggings and winter boots.

She paired the look with a leather-look coat and tied her long dark hair into a sleek ponytail.

Zaraah first turned up in Walford last year, after taking over the role of Chelsea from Tiana Benjamin who last appeared in 2010.

But the star is also known for appearances in BBC’s Waterloo Road, in which she appeared from 2008 until 2010, and in Coronation Street as Joanne Jackson from 2005 to 2007.

Zaraah has also competed in ITV’s Dancing on Ice, placing third, before returning in 2014 for the All Stars series.

She grew up in South London as the youngest of three siblings.

Although notoriously quiet regarding her private life, it is known that Zaraah has been married for six years and has one son with her husband.

When first asked about her new role in EastEnders, she said: "I am so excited to be joining such an iconic show and I am really looking forward to taking on the role of Chelsea Fox."