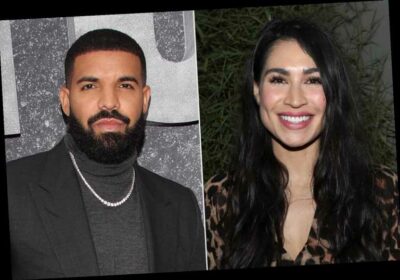 Cassie Steele just perfected the "Buss It" challenge on TikTok — and Drake approves.

Last week, Steele, who played Manny Santons in Degrassi: The Next Generation, took part in the viral challenge in which she recreated one of her character's iconic looks.

In the video, which she also shared on Instagram, Steele starts off dancing in a baggy shirt with her hair in a towel before she drops it low as her outfit transforms into a long-sleeved crop top and low rise jeans that reveal a peak at a bright blue thong.

The risque outfit is a throwback to an episode in season 3 of the hit Canadian series, during which Manny (Steele) went to school wearing a visible thong to gain attention from her male classmates.

"For everyone who enjoys a good throwback outfit! #mannysantos #ugotthelook #bussitchallenge," she captioned the video on Instagram.

Steele jokingly responded to her former costar, "They'll probably put it beside the ruby slippers." Before he became a Grammy-winning artist, Drake (real name Aubrey Graham) starred in the teen coming-of-age show for 100 episodes as Jimmy, a hotshot basketball player/amateur hip hop artist paralyzed from the waist down after a school shooting.

The series, which ran for 14 seasons from 2001 to 2015, focused on the students of Degrassi Community School as they grapple with relationship woes, friendship fights, disorders, drug and alcohol addictions, gambling problems, pregnancy scares and more. In 2018, Drake reunited with several of his Degrassi costars in the music video for his song, "I'm Upset."

The video ended with the show's catchy theme song, including new shots of the cast spliced with archive footage from the original show.