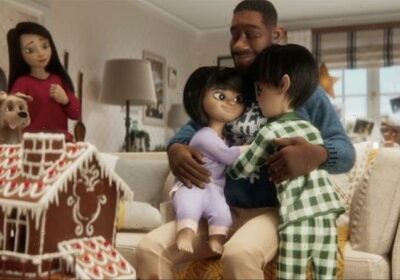 Disney is getting everyone into the festive spirit, having launched the official 2021 Christmas advert. The magical animated video is in support of the Make-A-Wish foundation and it centres around family togetherness. Grammy Award-winning jazz musician Gregory Porter performed the original soundtrack for the advert.

The countdown to Christmas has certainly arrived as Disney has launched its heartwarming festive advert for 2021.

The video is titled The Stepdad and it follows a family’s journey as they spend their first Christmas together.

Through reading a book together, the children find their imaginations running wild.

The song has been released as a charity single for the foundation and it has left viewers feeling emotional.

The three-minute clip acts as a sequel to the 2020 video titled Lola, which paid homage to festive traditions across generations.

Fans from across the world will be able to see the video on TV and digital platforms.

The story features a special book belonging to son Max, which came from his birth father.

The book explains how reading can help create strong bonds between family members.

The family at the heart of the video will leave viewers in tears as they navigate their emotional journey.

They work together to combine traditions from both sides in the run-up to the special day.

They all have critical illnesses and achieving their goals can be a part of the healing process.

The video has no dialogue but instead tells the enchanting story through the medium of song.

Love Runs Deeper will also be available to download when the video airs and all proceeds will go towards the charity.

Throughout the advert, viewers will spot some inspirational artwork created by children the charity supports.

One of the artworks comes from Dylan, 13, who achieved his dream of becoming an animator for the day.

Singer Gregory Porter said the lyrics of the soundtrack were powerful and demonstrate how there is love behind everything.

The lyrics include “when you open the door, I will be standing there” – a line Porter said made him feel “moved by emotion”.

The singer spoke exclusively to Express.co.uk about what the advert meant to him in more detail.

He said he saw himself within the characters in the advert and was keen to work with Disney again on other projects.

Tasia Filippatos, from Disney, said they were thrilled to be working with such an important cause once more.

Tasia said: “Reading together can be a truly magical experience and our advert celebrates this age-old tradition and the wonder and imagination it inspires.

“We hope the story will resonate with anyone who has seen the magic ‘lift off the pages’ of a book through the eyes of a child.”