Home » TV & Movies » Dexter Recap: [Spoiler] Is Brought In for Questioning, as Harrison Finally Comes Clean About What He Remembers

Dexter Recap: [Spoiler] Is Brought In for Questioning, as Harrison Finally Comes Clean About What He Remembers 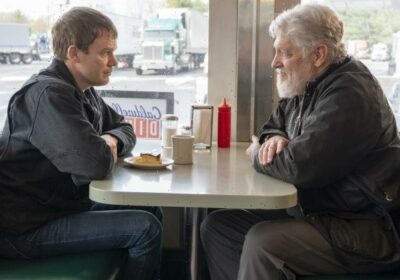 Last week’s episode of Dexter: New Blood delivered a huge reveal as Angela finally discovered the whereabouts of her missing friend Iris. Unfortunately, the poor girl’s remains were discovered at the bottom of some local caves.

With all signs pointing to Kurt Caldwell being the Big Bad (duh), will the suspicious diner owner be able to keep evading the police? More importantly, how does Dexter plan on dealing with the town’s serial killer problem now that Harrison is working for the No. 1 suspect? Sunday’s episode revealed all of that and more. Let’s recap!

We pick up right where we left off, with Dexter meeting Angela at the crime scene. Now knowing who Dexter really is, she wants his expert forensic opinion. He inspects the body and finds the girl’s shirt ripped; she was shot from behind with a rifle. She was also still alive when she was buried, and from the looks of it, had attempted to dig herself out. Dexter pulls a tooth out of her mouth. It has human skin on it, and there could be enough DNA to pinpoint the killer.

Angela tells Dexter she has a theory: Kurt Caldwell. She thinks he’s been hiding something, plus, he wanted them to call off the search just as Angela was readying to inspect the cave. Sus much? Yep!

Dexter and Harrison are still at odds about the boy’s new part-time job. Deb suggests Dex kill Kurt, but Dexter wants to let Angela work the case. That way Harrison will see Kurt for who he really is without putting any more distance between them.

Dexter tells Angela what happened between Molly and Kurt, and brings her to the creepy cabin in the woods. It looks like something was dragged away from the cabin, and when they enter the basement, it reeks of bleach and the apartment’s completely stripped.

As Harrison begins his job, Dexter grabs a cup of coffee at the diner to keep an eye on him. Kurt takes a seat in his booth, and Dexter asks if Molly ever got that interview with Matt. He’d really like to hear Matt’s side of the story, he tells Kurt, both poking and prodding. The conversation quickly turns into a suspenseful tête-à-tête, but before things can really heat up, Angela interrupts to arrest Kurt for murder. 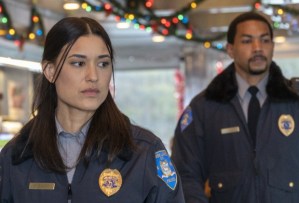 Kurt claims he’s innocent as Angela grills him about his FaceTime with Matt (which we and she know is a lie). She also asks him about the scar on his hand, and tells him they found a DNA sample on Iris’ body that matches his own.

Meanwhile, a driver at the truck stop gives Harrison an envelope to give to his dad. When Dexter opens it up, it’s a thin piece of metal (a nail?), and Dexter isn’t sure what to make of it. Later, he creates a diversion so he can sneak into the jail and visit Kurt. He warns him to stay away from his son. Kurt says the night Dex picked him up, he knows it wasn’t snowing; it was actually raining ash. And another troubling tidbit from Kurt: Titanium doesn’t melt. It seems Kurt knows exactly what Dexter’s been up to.

Dexter Googles what titanium compression screws look like, and sure enough, that’s exactly what was in the envelope. So Kurt knows Dexter killed Matt, and he has reach. Even from behind bars.

Kurt gives a statement to the cops, telling a story from his childhood of how his dad would pick up working girls and abuse them with young Kurt in the car. (The song the boy spins in the truck is, once again, Del Shannon’s “Runaway” — the same song Kurt repeatedly plays in the bar, and also the track the killer played before Lily was murdered in Episode 3.) He says that one night, he saw Iris hitch a ride with his dad. They drove off and that’s the last he saw of her. The rest of the story goes like this: Kurt’s father tried to bring Iris back home, but when he refused to let her out of his truck, she bit his hand and jumped out. As she was running away, he pulled out a rifle and shot her dead. Kurt claims the DNA in question is his dad’s. Since it was only a 67 percent match, Kurt’s eventually released. 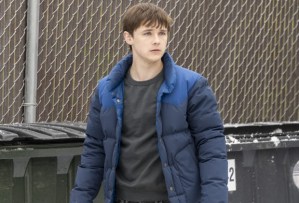 Dexter stakes out the diner, wondering what to do with the “loose end” that is the screw. He begins snooping around Kurt’s office, and comes to the conclusion that he’s going to have to kill him.

At the bar, Angela tells Molly that she was supposed to leave town with Iris, but backed out at the last minute. Molly says she was lucky that “Jim” showed up to the cabin when he did, even though his timing was certainly strange. Angela tells her Jim overheard them talking, but Molly notes that he was sitting too far away from them to have simply overheard their conversation. Maybe he recorded them, she guesses, recalling that he was charging his phone at the bar. When Molly walks outside, we see the newly free Kurt stalking her.

When a group of guys threatens Harrison, he pulls his razor on them, but luckily, Dexter is there to quell the situation. Harrison breaks down, saying he’s “f–ked up and always have been.” He says he’s always had nightmares, but when he listened to Molly’s podcast, it all came flooding back. “I remember everything,” he says, as we see a flashback of the Trinity Killer (hey, John Lithgow!) dripping in blood, standing over him. Harrison accuses Dexter of always knowing about Rita’s murder, and with that, the boy hops in a friend’s car and takes off. The episode ends with Dexter getting jumped from behind by an unknown assailant.

So of course Harrison remembers his mother’s murder, right? And does Kurt have an army of truckers helping him cover his nefarious deeds? Drop your best guesses in the Comments below!