I'm a Celeb: Jordan North vomits ahead of abseiling task

Tonight, the three I’m A Celebrity… Get Me Out Of Here! finalists took part in their last Bushtucker Trial, all in aid of winning a three-course meal. For Giovanna Fletcher, she had to endure Frightening Feast. But, during the ordeal, presenter Declan Donnelly apologised to the author and presenter for how difficult it was.

Those watching at home saw the mother-of-three eat a fermented duck egg, a cow’s nose and raw fish eye.

But the terrible treats did not end there, as she had to stomach a sheep’s testicle and bull’s penis to finish it off.

The first three stars were for the finalists’ main meals, with the fourth star for a drink and the fifth for a treat of her choice.

When the fermented egg was served, Dec said: “I’ve done this, I’m so sorry, it’s quite bad.” 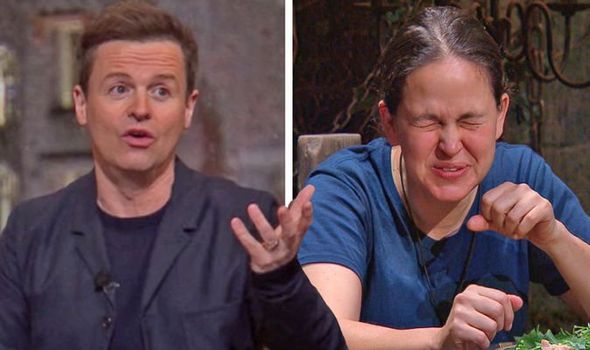 We will use your email address only for sending you newsletters. Please see our Privacy Notice for details of your data protection rights. AJ Pritchard addresses spat with Shane Richie

Despite the edible horrors, Giovanna managed to successfully complete the Trial.

As for what Vernon Kay had to endure, he took on the Table of Torment.

I’m A Celeb fans saw him try and win stars for the starters.

It was an endurance Trial and he had to lie flat shackled on a table for 10 minutes as various critters and rotten fruit and veg were placed on him. For every 2 minutes, he endured he would win a star for camp. 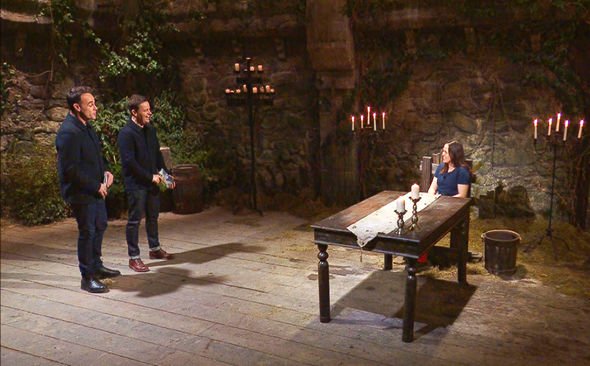 Similarly, to Giovanna, the first 3 stars for starters, the fourth star for a drink and the fifth and final star for a treat of his choice.

It didn’t get off to a great start with Vernon shocked at the horrendous smell of the rotten vegetables placed on him.

He exclaimed: “Oh my god that’s disgusting, that stinks,” and critters were then thrown onto his body.

Vernon successfully endured 10 minutes and afterwards said “That is the most horrific thing I’ve ever done in my entire life.”

Jordan North had to win the desserts for his fellow campmates in Iron Maiden.

He too had an endurance Bushtucker Trial and had to be locked inside a cage for 10 minutes as snakes joined him.

For every 2 minutes he endured he would win a star for camp.

The first 3 stars for desserts, the fourth star for a drink and the fifth and final star for a treat of his choice.

As he was placed in the cage, Jordan said: “Oh god, it’s a snake.

“Happy place. Happy place! I’m going to be drinking gin with Bev in Spain,” he chanted his infamous saying.

Jordan managed to successfully complete the Trial and all finalists would be eating a three-course meal, drink and treat of their choice.

Giovanna, Jordan and Vernon all sat down for a final meal together of their favourite food.

Vernon had prawn cocktail, chicken and sweet potato mash, treacle sponge, a cup of tea and sourdough bread with marmite and cottage cheese.

I’m A Celebrity… Get Me Out Of Here! concludes tonight at 9pm on ITV.