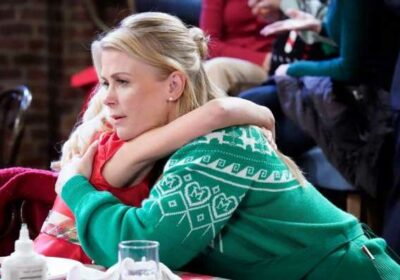 Days of Our Lives fans all agree that Sami Brady is one of the central figures of the show. But, the fan base is divided over whether she’s misunderstood or just plain devious. Depending on which camp you fall in, this week’s shows will either reinforce your beliefs…or change your mind altogether.

[Spoiler alert: Potential spoilers for this week’s episodes of Days of Our Lives are ahead.]

On ‘Days of Our Lives,’ Sami declares Lucas is her soulmate

On the Monday, January 3 episode of Days of Our Lives, SoapHub reveals that Sami will suggest that she and Lucas leave town to try to work on their relationship. She believes that Lucas is her soulmate, which is a bit of a shocking twist. But that’s because Lucas has managed to convince her of something that isn’t true. (Hey, Sami, we thought you knew better than that.)

“Lucas Horton (Bryan Dattilo) continued gaslighting Sami Brady DiMera (Alison Sweeney) into believing EJ DiMera (Dan Feuerriegel) was the kidnapper even after she shared her doubts,” revealed the outlet. “Feeling her slip away, Lucas doubled down, teamed up with Chad DiMera (Billy Flynn), and cooked some books to make good and sure Sami wouldn’t doubt the story again.”

The whole relationship is apparently built on lies and slander. A mess! But, alas, EJ has to move on too. And if he has his way, he’ll move on right back with Nicole.

With Sami off and running with Lucas, Soaps.com reveals that the Wednesday, January 5 episode of Days of Our Lives will feature EJ trying to make amends with Nicole. This is going to prove harder than it seems on the surface.

For starters, Nicole still hasn’t quite gotten over the whole “Sami put the hands and the feet on her” situation. (Not that Nicole didn’t deserve it. We’d obviously interject that it’s a good idea to close your legs to married men, but Nicole didn’t get that memo for either Sami or Ava, so here we are today.)

But, there’s something else holding Nicole back. And it’s getting pretty obvious to everyone in Salem as we speak.

But is Nicole’s love for Rafe getting in the way?

According to Celeb Dirty Laundry‘s Days of Our Lives spoilers, this week will feature Ava throwing a whole cake at Rafe after she finds out he’s been cheating. (She already murdered Duke the Bear, people! This woman has no limits!) But the cake is just the least of Rafe’s problems.

“Ava will plot against Rafe and Nicole Walker (Arianne Zucker). Nicole will discover beheaded Duke the teddy bear and guess Sami might be to blame,” reports the outlet. “Rafe will suspect Ava might’ve had something to do with it instead, but she’ll play dumb and even act offended by the accusations. Ava will then lie about seeing a blonde at Basic Black who might’ve been Sami. She’ll go along with Nicole’s false assumption and talk Rafe out of checking the security footage of the office.”

All of Ava’s machinations will be for naught, though. Nicole can’t hide her feelings for Rafe anymore, and it’s evident that Rafe feels the same way. This week’s Days of Our Lives will definitely be packed with drama for sure.