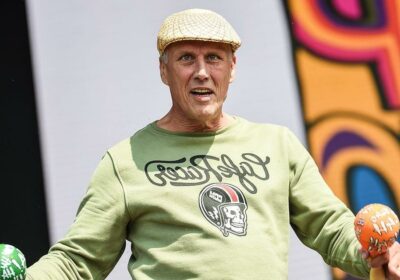 The Happy Mondays dancer was fully embracing the Halloween spirit this week as he took to Instagram to post the topless pic, which featured him in costume posing with a huge python.

Bez could be seen wearing a wraparound Roman-style cream skirt with a striped belt running down the middle, plus a tall grey hat and black eye mask.

The star wasn’t afraid to get his abs out as he posed alongside a woman with a huge green spotted python draped casually around her neck.

Wearing a tight black bodysuit and red cape, the pair were definitely embracing the spirit of the spooky season together.

Writing alongside the throwback snap, Bez posted: "How Do everybody! Wishing you all a very spooky Halloween."

One of the star’s pals quickly commented on the post: "Bez – the God of Dance! This is Tanit the Goddess. What a riot we had on the island a few years ago. Can’t wait for our next encounter. One love amigo…"

Fans immediately clamoured to show Bez some love, as one posted: "Legend Bez!"

"Hi Bez, nice python!" another quipped, while a third followed up: "Brilliant!"

It comes after Bez addressed his incredible weight loss transformation on BBC Breakfast, leaving Naga Munchetty bowled over by his trim figure.

Between training for his celebrity boxing appearance for Boxstar UK, Dancing on Ice preparation and his own lockdown fitness sessions – dubbed Buzzin’ with Bez – he lost nearly two stone.

Appearing on the programme, the maraca legend was asked by Charlie Stayt: "You take your fitness quite seriously, don’t you, because during lockdown there was attention on that."

Bez explained: “We did the Buzzin' with Bez and that was the start of my journey into fitness, because during the first lockdown I spent a lot of time drinking cider, eating cake and chocolates.

Naga broke in: "The most important thing is you feel good. It's not so much the weight, it's that you're feeling better."

Bez agreed: "I'm feeling a lot better, and I can fit in the clothes I once bought and couldn't get in any more, which I'm quite happy about."

Naga couldn't help but pay Bez a compliment, as she said: "You're looking very dapper."

Bez admitted he had been spending more than £100 per week solely on chocolate, while his wife was baking him cakes and biscuits every day.