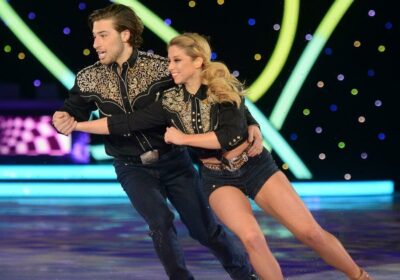 Former Dancing On Ice professional and two-time champion Alex Murphy has spilled on all the behind-the-scenes goss from the popular ITV series.

Alex, who won the show with Joe Swash in 2020, announced her departure from the ice rink last year and has since focused on other projects.

However, that didn't stop the stunning professional dancer from spilling some show secrets regarding pairing, judge reactions and the hair and makeup process.

Speaking exclusively to Daily Star, Alex said: "I've always been really lucky with my partners, I'm pretty sure they work out who would be best together and who brings out the best in one another – that's what I've always liked to believe.

"I try to stay in touch with my partners where possible, I've been so lucky in terms of who I've worked with – especially as they've always put the effort in.

"I would say that we rehearse anywhere between five to seven days per week. The partners I've had usually get bitten by the bug once the show starts and they really want to train – I'm that way too.

"From the beginning of the show through to the end I'm usually training seven days a week with my partner – there wasn't a day that went by that I didn't see them for 10 weeks – it's a lot!"

Speaking on one thing that shocked her from a behind-the-scenes perspective, Alex said: "In 2020 we did a full group number, and I was utterly shocked by how quickly hair and makeup was turned around.

"They did it all with the live audience in there and it as done in around 30 seconds. The makeup team don't get enough credit for how truly fantastic they are."

Alex also confessed that the different judges are after different aspects of success from individuals, saying: "The likes of Torvill and Dean are looking for the technique, all the serious aspects of the show, whereas Ashley is looking at the theatricals, chemistry and the like.

"The fun thing about having the different celebs on there is that you see them all play to different strengths, like Joe, his ability to act was fantastic."

And it seems DOI wasn't the last time Alex would see Joe, with the beauty confessing that she might be seeing him soon as the duo have both been nominated for a social media award against one another for best social media couple.

Joe and Stacey have of course taken social media by storm, as has Alex and her partner Kleiny, one part of YouTube sensation WoodyandKleiny.

Alex is also up for an award for Celebs Go Skating as the best social media presenter.

Despite leaving Dancing On Ice, she hasn't slowed down, with her social media TV show of Celebs Go Skating and her brand new podcast preparing to launch imminently.