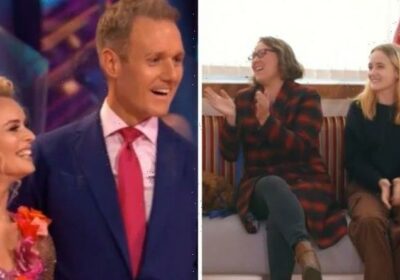 Strictly: Dan Walker is surprised by family during practice

Dan Walker and professional dance partner Nadiya Bychkova kicked off Saturday’s episode of Strictly Come Dancing with a Viennese Waltz to Billy Joel’s hit She Always A Woman. Ahead of the live performance,  the BBC Breakfast presenter’s three children opened up on their dad’s dancing in a rare appearance during rehearsals.

Dan explained that She’s Always A Woman is one of his wife Sarah’s favourite songs which is one of the reasons he wanted to perform it to the Strictly judges.

Ahead of his performance on Saturday night, his children Susanna, Jessica and Joe were interviewed about his progress in the competition in their first appearance on the BBC One show.

The three children and Sarah joined Dan and Nadiya in the studio for a sneak peek of his rehearsal to the Billy Joel classic.

Sarah said she was “excited” and Susanna, better known as Suzie, revealed she thought Dan had done “amazingly”.

While they were all together in the studio, Dan asked his children: “I think beforehand you were worried that I’d be a bit embarrassing right?”

However, to his relief, all three youngsters said they have not found their dad embarrassing “at all” during his live performances.

After Dan’s family got to see his dance rehearsal in the studio, his wife Sarah said: “We’ve just watched it, and he was amazing.”

BBC viewers took to social media to gush over the BBC presenter’s family, with Dragons’ Den star Deborah Meaden tweeting: “He seems like a genuine and lovely guy with a lovely genuine family.”

Clare Gilbert commented: “Oh my. Fab to see you in training and your family visiting. Looks like we have a love of Cockapoos. Gorgeous, good luck this week to you both.”

Fiona added: “OMG, Dan Walker has such an ADORABLE family, he loves his wife and isn’t afraid to say so on national TV and he can Waltz!

“It’s just the sort of heartwarming stuff we all need at the moment. Also, cute doggo!”

Rose Ayling-Ellis, 26, remains the favourite to win this year’s series, according to the bookies.

It’s just an 11/10 chance with Ladbrokes that the EastEnders actress will take home the Glitterball Trophy with pro partner Giovanni Pernice.

This leaves John Whaite and Johannes Radebe second in the betting at 5/2.

TV presenter AJ Odudu and Strictly pro Kai Widdrington are fancied as a 5/1 shot to the trophy, but the rest of the competition have found themselves with odds of 16/1 or bigger to win.

Jessica O’Reilly of Ladbrokes said: “All eyes will be on Rose and Giovanni’s romantic Viennese Waltz this weekend, especially after his split from Maura Higgins.”

This weekend, Loose Women star Judi Love will not be performing after testing positive for COVID-19.

She is due to return to the competition with Strictly pro Graziano di Prima next week.