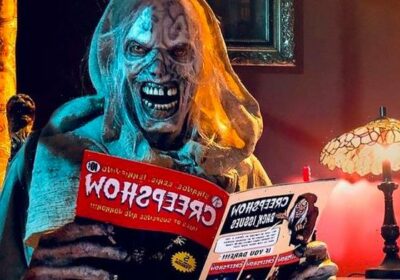 (Welcome to …And More, our no-frills, zero B.S. guide to when and where you can watch upcoming movies and shows, and everything else you could possibly stand to know.)

Creepshow will return for another season of thrills and chills, with new cast members, new directors, and new scares all coming together in one spooky package. The new season of the Shudder hit is just around the corner, so we’ve rounded up some info you need to know about Creepshow season 3 in advance.

Creepshow Season 3 Release Date and Where You Can Watch It

Creepshow season 3 will break out of its crate on September 23, 2021. The third season of the horror series will be streaming on the (excellent) horror streaming service Shudder. It’ll also be available via the Shudder offering within the AMC+ bundle, if that’s something you’re into. Season 2 played on both Shudder and AMC, so there’s good reason to assume something similar is going to happen here.

What is Creepshow Season 3?

Creepshow season 3 is the third season in the series inspired by the George A. Romero classic Creepshow, a horror anthology film featuring a script from an up-and-coming writer named Stephen King. The TV take on Creepshow comes from filmmaker and make-up effects artist Greg Nicotero.

“Creepshow continues to be near and dear to my heart and having the opportunity to continue the legacy by developing season 3 gives me the chance to work with some of the best storytellers and artists in the business. The stories we have in the pipeline for season 2 are even more outrageous, more fun and capture the spirit of what George Romero and Stephen King started in the ’80s,” Nicotero said when season 3 was announced.

Since Creepshow is an anthology show, with each episode telling different stories, there’s no main synopsis. However, we do have some info on the stories we can expect to see.

“We have a Joe Hill story called ‘Mums’ that Rusty [Cundieff] directed, Ethan Embry stars in. There’s a couple original stories; the story that James stars in is called ‘Skeletons in the Closet’ about a prop collector who, as it turns out, is such a fanatical fan that he digs up skeletons that were used in movies to add to his prop collection,” Nicotero said during Comic-Con. “So it’s sort of loosely based on the legend that in Dawn of the Dead and Poltergeist that they used real skeletons as props for movies. I always loved the idea of, like, ‘Wait, that was a person and their skeleton was used?’ John Esposito wrote the script, I directed it, and James came in to play a couple days.”

Different directors tackle different episodes, and we still don’t have a full list just yet. However, we know that season 3 will have Greg Nicotero directing, as well as Rusty Cundieff (Tales From the Hood), John Harrison (Tales from the Darkside), and Joe Lynch (Mayhem). Cast-wise, we know we’ll be seeing Ethan Embry, Michael Rooker, James Remar, Reid Scott, and Johnathon Schaech. There will obviously be more cast members announced later. Mattie Do is also on board as a writer, as well as John Esposito.