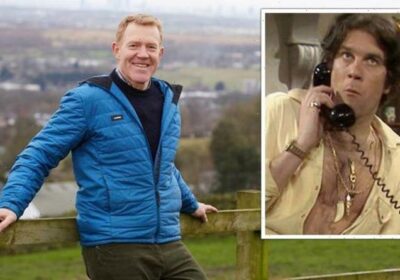 Countryfile’s Adam Henson is a familiar face on the BBC and he is known for offering insight into the world of farming. He has fronted a number of TV and radio shows and is exceptionally well qualified in the business. Fans may also be interested to hear he is the nephew of Nicky Henson – a famous actor.

Nicky Henson was a British actor who was born in London, and he was the son of comedian Leslie Henson.

He initially trained as a stage manager and made his first on-stage appearance as a guitarist.

Nicky was known for a number of roles, including Mr Johnson in Fawlty Towers.

He starred in the episode titled The Psychiatrist, which showed Sybil (Prunella Scales) flirting with Henson’s character, who is a guest.

According to My London, Nicky once said that despite his 50 years of professional acting, his tombstone would read: “Here lies Nicky Henson – he was in one episode of Fawlty Towers”.

Nicky also had guest roles in shows like Inspector Morse, A Touch of Frost and Heartbeat.

He may be recognised for playing the title character in the 1995 remake of Shine On Harvey Moon.

The actor later joined the cast of EastEnders in 2006, playing Jack Edwards, but he left at the end of the year due to health problems.

Also known for his roles in theatre and film, he made appearances in Witchfinder General and Vera Drake.

They had two children together, but his marriage ended and he was later wed to ballerina Marguerite Porter, with whom he had a third son.

The actor had been diagnosed with cancer in 2003 and three years later his tumours had grown.

He is not Adam Henson’s only famous relative, as the Countryfile star’s father, Joe Henson, was a famous presenter.

Joe hosted his own countryside television programme and was recognised for his dedication to the industry.

His cousin, Christian Henson, is a well-known British composer who has worked on TV and film soundtracks.

Adam took over the running of his father’s Cotswold Farm in 1999 and he was joined by college friend Duncan Andrews.

A decade later, the presenter was fronting the Adam’s Farm slot on Countryfile on Sunday evenings.

His latest venture has been hosting the Channel 5 series Our Family Farm Rescue.

In the show, Adam meets farmers across the country who are risking everything to keep their family businesses afloat.

Whilst he is not running the 1,600-acre estate left by his father, Adam is recording new episodes of Countryfile.

As for his famous uncle’s show Fawlty Towers, the British classic features in the list of series viewers would most like to see make a comeback.

Freesat conducted the research, which found 28 per cent of the nation would like to see the show return to their screens.

Countryfile continues on Sunday at 9pm on BBC One.