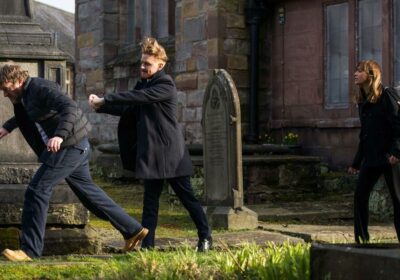 As Kelly Neelan (Millie Gibson) tries to come to terms with her mum’s Laura Neelan's (Kel Allen) death, she needs to prepare to say a final goodbye to villain father.

The youngster is overwhelmed when she discovers she stands to inherit everything from her dad, including the family home.

She asks Gary Windass (Mikey North) to go and check on the house for her.

At the neglected house Gary is faced with a photo of a smiling Rick and packs up some belongings to bring back to Kelly.

As she looks at the reminders of her childhood, Kelly’s overcome with emotion and hurries out.

Alone in Victoria Garden and numb with misery, Kelly takes out her mum’s little bottle of morphine from her pocket and unscrews the top just as Abi Webster (Sally Carman) arrives.

When Maria Connor (Samia Longchambon) admits that she might not attend Rick’s funeral as she has her council reputation to think about, Gary’s angry and reckons she should be putting Kelly first.

As Gary, Maria and Kelly arrive for Rick’s funeral. Gary glances nervously about, hoping that none of Rick’s cronies are going to turn up.

As they gather at Rick’s graveside, a man approaches and spits on Rick's coffin, telling Kelly that he hopes he rots in hell.

Gary snaps and punches the man. No one notices a photographer lurking in the bushes.

Will there be more than one body to be buried at the cemetry?

Corrie fans are aware that Gary is responsible for Rick's death and murdered the loan shark back in 2019.

However, Laura took the blame for killing Rick so Kelly could continue living with Gary and Maria.

Laura was desperately trying to find Rick and hired a private investigator to try and find her former husband in an attempt to secure money for Kelly.

But when the PI told her all the evidence pointed to Rick being dead, she learned that Gary was also the prime suspect.

Eventually, Gary came clean, prompting Laura to do what she can so Kelly can have the family she deserves.