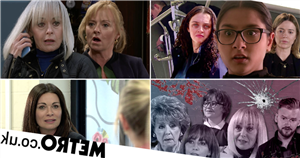 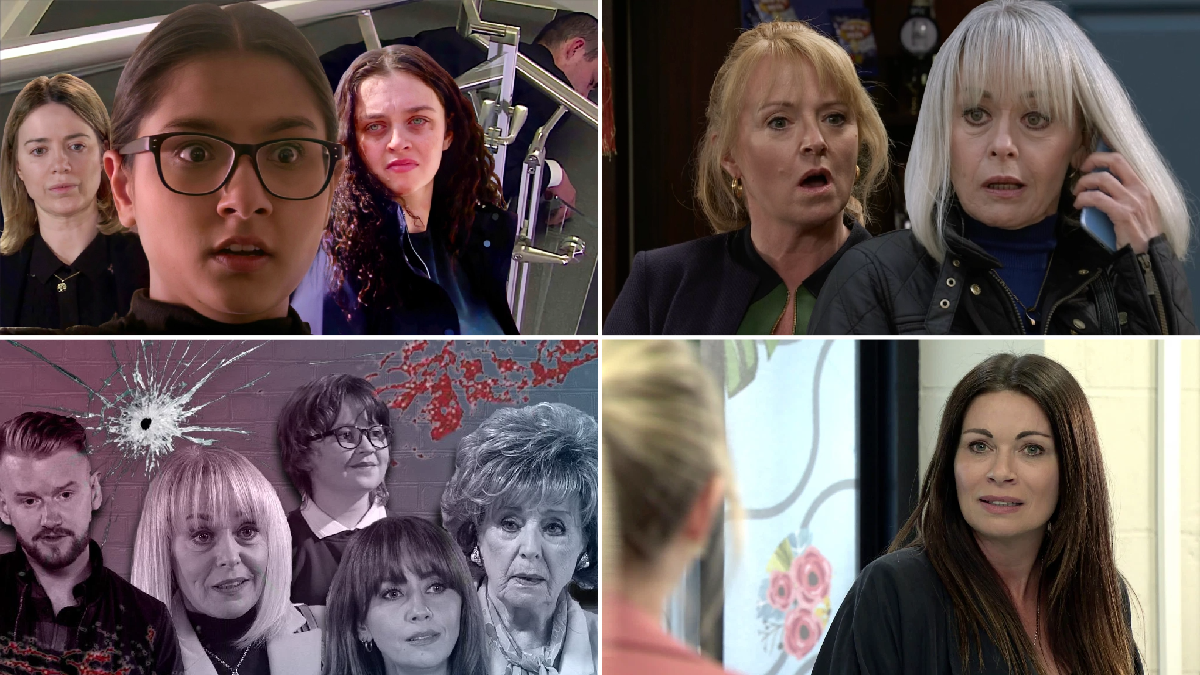 It’s a huge in Coronation Street with gun shootouts and murderers being left for dead and meanwhile a duo is committing a huge crime.

Yep, that’s right – it’s a Corrie week of 9pm specials and we have the full gossip.

Aware Jenny is onto her, Sharon needs to up her game and quizzes Toyah about Leanne’s recent visit.

When Natasha confronts Gary, accusing him of hiring the man with a van who kidnapped Sam, Jenny is intrigued to learn it was Sharon who hired the van. As she voices her suspicions to Ronnie, he reveals he heard Sharon quizzing Toyah about Leanne.

With Jenny’s mind racing, she tells Toyah and Imran how she suspects Sharon was involved in Sam’s kidnap. When Imran reveals that Sam was kidnapped to draw Leanne out of hiding as she’s the key witness in the trial of a drugs baron called Harvey, Jenny is stunned.

Determined that Rita should know the truth, Jenny bangs on her door, however when Sharon appears, it looks like Jenny could be in grave danger.

Later, Imran confides in Ronnie and Gary that he has reported Sharon to the police as it appears she’s involved with a drugs gang. Rita returns home to find Sharon clearly about to do a runner. As Rita demands answers, is she in the same danger as Jenny?

Sarah begs Adam to reconsider donating his liver, suggesting that he’s only doing it out of guilt and it’s a hell of a price to pay. Adam is torn. Adam tells Sarah he has taken his name off the donor list and wonders how he’s going to break the news to Peter and Carla.

Carla tries to chase Lucas for payment, only to find his phone number no longer in use. Carla admits to Sarah that she was right not to trust Lucas as it seems he has gone bust.

When Nina overhears Asha telling Corey that she’d like them to get back together, she’s horrified and points out that it was Corey who killed Seb. Determined to stick to her plan, Asha defends Corey, leaving Nina devastated by Asha’s apparent betrayal. Asha assures Nina she’s still her friend and things aren’t how they look.

After a chat with Roy, Abi dumps the bag of goth dresses in front of Nina, ordering her to go and put one on, as Seb would want her at his funeral dressed as the Nina he loved.

Sat beside Seb’s coffin, Abi’s heart breaks as she tells him how she wishes she’d been a better mum.

Gary tells Maria that he’s thinking of taking a job in Bristol to be near Zack, will she ask him to stay?

Sharon pours her heart out to Rita, explaining how after her relationship with Ian fell apart, she had no choice but to join her drug dealing brother and life went downhill from there. Rita assures Sharon that she still loves her no matter what.

Maria’s shocked to hear from Imran that it was Gary who helped piece together how Sharon orchestrated Sam’s kidnap.

Spotting the same van that was used in the kidnap outside The Kabin, Gary forces his way inside, ordering Rita to call the police whilst he goes after Sharon. But outside, the driver pulls out a gun. As Maria checks on Rita, suddenly a gun shot sounds.

As Seb’s hearse pulls up on the street, Abi’s emotional while Nina’s disgusted when Corey appears, making out he wants to pay his respects. As the wake takes place in The Rovers, Abi’s devastated to overhear Corey on his mobile, laughing about Seb’s death. Picking up a broken bottle, Abi set off after Corey, hellbent on revenge.

Carla and Sarah arrive at Lucas’s deserted premises and jemmy the door open hoping to reclaim their stock.

As Abi pursues Corey, Asha clocks the bottle in her hand and begs her to drop it, pointing out that Seb wouldn’t want her back in prison. Will Abi relent? Soon afterwards, Abi meets up with a dealer and buys some drugs.

At the flat, Asha convinces Corey that she believes he’s innocent and wants to spend the night with him. Having got the drugs from Abi, Asha slips them into Corey’s drink.

When Abi reveals Asha’s plan to drug Corey and go through his phone, Nina is shocked to realise Asha has been playing him. With Corey unconscious, Asha scrolls through his phone. But when a call from worried Nina causes him to stir, is Asha in danger?

Carla and Sarah load up the van with the boxes of knickers and make their getaway. Back on the street, Adam breaks the news to Peter that he’s no longer willing to be a liver donor. Carla’s gutted to hear that Adam has pulled out and is further angered to discover Sarah encouraged him.

The repercussions of Sharon’s unmasking are felt throughout the street. Did she make her escape? Did Gary get caught in the crossfire?

As a suspicious but disorientated Corey staggers around, a worried Abi and Nina arrive at the flat. Corey tries to barge past them, but loses his balance and falls down the stairs.

As Asha looks down at Corey’s lifeless body, the women are left with a decision to make – call an ambulance or leave Corey for dead to pay for what they believe he did to Seb?

Abi returns home and, pulling out the order of service from Seb’s funeral, is overcome with emotion.

Carla is fuming with Sarah, accusing her of talking Adam out of the transplant to get back at her for sleeping with Adam. Sarah insists Peter’s a lost cause.