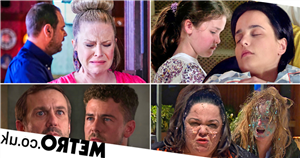 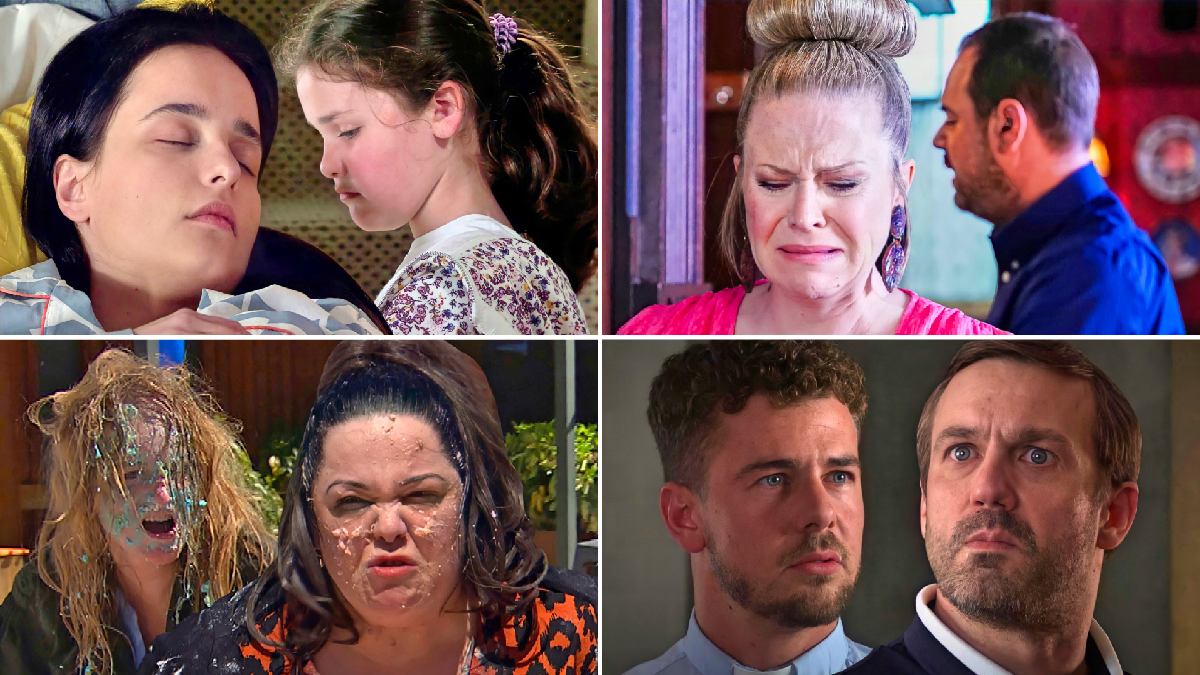 Death is a subject of much discussion in the soaps next week, as some attempt to take a life, while others mourn the loss of something they hold dear!

Alina Pop, for example, is in deadly danger when a fire breaks out, and it appears as if Hope Stape caused the blaze!

Linda Carter, meanwhile, is heartbroken when she discovers that her beloved Bonsai tree has died.

Villainous Warren Fox stoops to a new low to get himself out of a spot of bother following Joel Dexter’s discovery, as he threatens the life of Cleo McQueen!

And over in Emmerdale, Sarah Sugden struggles in the wake of Leanna Cavanagh’s death, especially when Liam reminds her that one never knows the moment when one’s time on this earth is up.

Coronation Street and Emmerdale have ditched the box-set format following the final of Euro 2020, meaning you’ll have to catch them nightly.

EastEnders, however, continues to stream each and every Monday on iPlayer until the end of the Tokyo 2020 olympics, meaning that you’ll be able to binge all of next week’s action in one go!

Hollyoaks, meanwhile, will air as usual on Channel 4 and E4 respectively.

Fancy some weekend reading while waiting for the next batch of your favourite soaps? We’ve got you covered, with an in-depth look at all of next week’s unmissable moments in the land of soap.

1. Hope steals a set of keys to Alina’s home, and after telling Fiz she wants nothing to do with the baby, she sneaks back into flat. Alina, meanwhile, is soundly asleep, unaware of the imminent danger, as smoke creeps under her bedroom door! Eileen and Sally realise the salon flat is on fire, and call for an ambulance. Tyrone discovers what’s transpired, and sets off to the hospital. Hope, meanwhile, watches from the window.

2. The cause of the fire is revealed to be an aromatherapy candle, and Alina is horrified, as she thinks she’s to blame. Hope, meanwhile, points the finger at Alina, claiming that as she was home alone, it must’ve been her fault. Evelyn, however, starts to piece together the truth when Hope asks if the person responsible for the blaze will get into trouble. Fiz tells Hope they need to talk about the fire, but will Tyrone tells the police they think their daughter is responsible?

3. Michael and James are frustrated when they learn that the complaint they made isn’t being taken further. James confronts Craig, questioning if he reported the fact that he wasn’t driving erratically, leaving the young cop flustered. James is disappointed and Craig feels awful, so he questions PC Brody about the arrest once again. Brody suggests that black people are over sensitive, which leaves Craig appalled.

4. Aadi tells Summer that he’d miss her if anything happened to her, and she’s touched, admitting that she feels the same about him. Flustered, he leaves and later tells Amy about his crush on Summer. Amy offers him some advice, but Tracy misconstrues the scenes, believing that Amy and Aadi are an item! Steve, much like Tracy, gets the wrong end of the stuck and launches an attack on Dev for allegedly encouraging his son to have sex with Amy! Little does he know that Amy, Aadi and Summer have witnessed the showdown!

5. A witness liaison officer named Lauren pops by the cafe for a meeting with Nina. Nina is upset, horrified at the thought of having to re-live her terrible ordeal.

6. Todd looks at properties, before admitting to George that he still hasn’t found anywhere to stay. Taking pity on him, George tells him that he’s welcome at his.

7. Izzy calls Sarah and Carla, accusing both of them of lying to her. Carla ultimately comes clean, admitting that they were just trying to protect her. Izzy, however, kills the call, leaving Sarah and Carla upset, as they point the finger at one another.

8. Phil gets a call from Ritchie regarding the situation with Raymond. After a confrontation with Jack, the Mitchell hard-man is seething, and therefore he opens up to Kat, telling her that Ritchie said it will be hard to get custody of Raymond, and therefore he’s considering taking him and doing a runner! Kat, horrified, tries to talk him out of it, but will she succeed?

9. Nancy plans on going away on holiday with some girls she’s met, but Sharon’s not best pleased give that she’s leaving her in the lurch with no notice. Frankie is worried for her sister, and finds her drunk at the bar. One of the girls is rude to her, so Nancy intervenes, and a fight breaks out! The siblings spend the night in a police cell, which allows them the time they need to open up to one another.

10. Bernie refuses to eat, and pops another diet pill. But soon enough, she collapses, and Keegan rushes to her aid, while Gray telephones for an ambulance. When quizzed about the medication she’s on, Bernie reveals she’s been taking diet pills, leaving Keegan in shock, as he finds out that Tiffany has been supplying her with them!

11. Dotty confronts Vinny for telling Keegan about their night of passion. Vinny, however, reveals his true feelings for her, leaving her feeling awful. Keegan, meanwhile, picks up his wages, but Dotty offers him a drink. Tiffany attempts to get in touch with her husband, feeling awful about what’s transpired with Bernie, but Keegan ignores her calls, as things between he and Dotty heat up!

12. Kat has a rare record in her possession that she hopes will assist Billy in getting back on his feet, explaining that she used Phil’s money without him knowing. She subsequently plants the record among Billy’s things, and Jay pretends to find it. Billy can’t believe his eyes, and soon enough the bids flood in! Janet, however, tells Billy she wants it. Kat finds Janet playing with the record, and comes clean to Billy about how it was a lifeline she threw him. Matters are somewhat complicated though, when Kat finds a scratch on the record!

13. Terry overhears Whitney singing, and sends a recording of her voice to a music promoter, who is a friend of his. Whitney refuses to meet with her, but Terry is insistent!

14. Linda is devastated, as her Bonsai is dead, and she quickly points the finger at Shirley!

15. Jamie makes a huge decision, as he decides to leave the village. Before doing so, however, he heads up to Home Farm, breaks in and accesses the safe. Gabby, having heard a noise, realises someone’s in the house, and as she goes to call the police, Jamie steps out of the shadows, with a bag of cash in his hand. She’s upset that he’s departing, feeling betrayed, but Jamie admits he never wanted the baby.

16. Gabby clutches her stomach in pain, so Will decides it’s best if he take her to the hospital. Bernice subsequently shows up, and apologises for being a lousy mum, making it clear that she intends to step up now she has the chance. She asks Gabby to move in with her, but can the duo co-exist under one roof?

17. Sarah is feeling incredibly stressed in the wake of Leanna’s death, and she’s not pleased when Faith suggests they live life on the edge. Faith books some activities up at the HOP, and Sarah invites Cain. Things take a turn, however, when Faith receives a phone call from the doctors to go in urgently. She prepares for the worst, certain she’s going to get bad news. Sarah, meanwhile, bumps into Liam at the graveyard. He reflects on Leanna’s death and how fate just decides when it’s your turn to go. Anxious Sarah rushes home, where she slumps on the floor.

18. Nicola and Jimmy decide that they’ll tell the kids they’s splitting up after Angel’s birthday party. As the party commences, however, Nicola proceeds to badmouth Mandy, which Mandy overhears! She retaliates by attacking her with a huge inflatable, and soon the two women are brawling, with birthday food flying left, right and centre!

19. Keen to get Leyla out of her life, Meena matchmakes her with Liam. But will her efforts pay off?

20. Ryan is skint after playing poker with Mackenzie. He’s lost £250! Desperate to win back his money, he challenges Mack to another game, but has he bitten off more than he can chew?

21. Joel works out that his Warren broke in to Price Slice, and orders him to come clean. A heated showdown ensues between the father and son duo, ending with Joel demanding that Warren turn himself in, or will he do it for him! Warren agrees, but later has a change of heart, as he proceeds to threaten the life of Cleo, knowing how much Joel cares for her.

22. Cleo is celebrating her birthday, but she’s not really in the party mood after Toby’s present doesn’t go down too well. Joel meets up with her, under the pretence of simply wanting to wish her a happy birthday, but Cleo can see right through him. The priest therefore reveals the truth, warning her about the threat on her life! One thing leads to another, and in the heat of the moment, they share a passionate kiss!

23. Cindy takes matters into her own hands, posting on social media about Sue’s funeral, hoping Ollie will take the bait and make an impromptu return. Ollie is a no-show, but Luke’s estranged sister Zara arrives on their doorstep, livid to have found out about her mum’s funeral arrangements via a social media post! Luke and Zara bond over old memorabilia, which ultimately gives Luke an idea: he’s going to propose to Cindy!

24. Felix is questioned about his whereabouts when Price Slice was robbed, but determined to protect Martine, he keeps shtum. Martine, however, decides to tell the police everything, but withholds the truth from Grace. But Grace finds out anyway, and she’s devastated when Felix lies to her about it. Martine comes to realise Grace knows everything, and she subsequently issues Martine with an ultimatum.

25. Diane has a change of heart about Scott, as extends an olive branch, but trouble is brewing once again, as she struggles to relax while Scott minds the children, leaving Tony worried. The legendary soap couple enjoy a fun night out together. That is, until Diane wakes up, evidently concerned for Eva’s safety. She rushes to find Scott asleep beside her, and she’s relieved, but when she spots a pizza box nearby, she panics. Tony decides it’s time to have a chat about Diane’s ‘excessive’ behaviour.