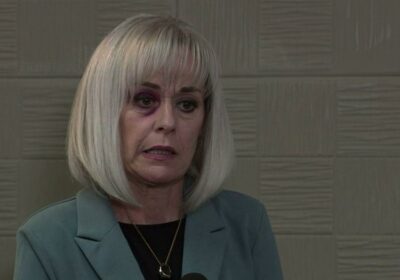 Coronation Street fans were left stunned this evening after Harvey Gaskell's aunt Sharon Bentley testified against him in court – which saw her bargain no jail time after her arrest.

After leaving court, she returned to Rita, who had previously told her she could have £10,000 to start over.

Rita remained adamant over giving Sharon another chance and showering her with support – but as fans thought she may be turning over a new leaf, they were left sorely disappointed.

Sharon headed over to a car to discuss her dealings in court, which saw her confirm that she will be taking over the drug firm.

It seems like that was her plan all along – but now it looks like she's going to betray Rita to make the operation a success.

Fans are adamant that she's going to fleece Rita for all she's got after Sharon said that she needs £10,000 to start her off.

Another added: "Oh no, it looks like Sharon is going to fleece Rita by stealing her £10k from her. Protect Rita at all costs!"

A third joked: "Sharon's going to take the firm over… she'll have Rita on a mobility scooter and delivering by next week!"

Others flocked to Twitter to share their shock at the twist, with many recognising that it's likely that Sharon won't be leaving as fans suspected.

Harvey is yet to be sentenced, but he has been sitting in jail prior to the trial – though fans are convinced that he's going to be less than impressed when he finds out what his aunt is up to.

Just last week Harvey ordered a brutal attack on Sharon after she rang Leanne to warn her that she was in danger following Harvey's plan to fire gunshots as a warning to her.

Rita found a helpless Sharon in her flat after the attack and she shared her hopes to disappear – but asked Rita for £10,000 so she could do it.

However, now that it looks like Sharon is here to stay, will she still get the cash she needs to continue the firm if Harvey goes to jail?

Coronation Street continues on Friday on ITV at 7:30pm.