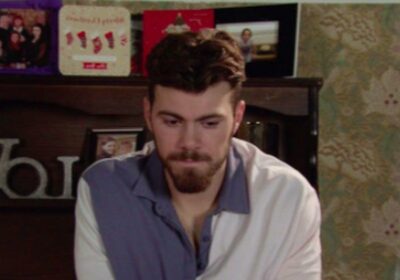 Coronation Street fans are convinced that Amy Barlow will discover the truth about her sister’s fiancé Curtis as viewers branded him “shifty”.

While delighted Emma gushed over her wedding dress, venue and how big her guest list will be, Curtis made several unusual comments about his desire to not invite any family and friends of his own to the wedding.

Later on, Emma went over to her dad Steve's house to ask her half-sister Amy Barlow to be her bridesmaid.

When Emma asked about the guest list, Curtis, who suffers from an incurable heart condition and recently dropped out of his studies told Emma: "There's nobody I really want there apart from you."

Emma asked if he wanted to invite his med school pals, to which he replied: "They're just too square…"

And a suspicious Amy replied: "Haven't you got many mates?"

Curtis justified his answer by saying: "Yeah, I've got like two really good mates but they work abroad. I don't really get on with my family, so it'll be her side…"

Amy swiftly changed the subject, but fans of the hit show are convinced that she is suspicious of Curtis and he won't end up marrying Emma.

One fan tweeted: “If a guy says all I want at our wedding is you – I haven’t got any family, oh my best mates are abroad then he’s definitely a wrongen, even Amy’s clocked it."

Another added: "Curtis is as shifty as AF #corrie."

A second added: “I don't even think Curtis Delamere is his real name. #Corrie #CoronationStreet.”

Fans later saw Emma confide in dad Steve McDonald about her desire to have his family at their wedding and told him about her intensions to track them down and invite them to the big day.

Coronation Street will welcome a new resident on the cobbles next week when Curtis Delamere’s ‘dead’ dad, Neville shows up on the cobbles.

Fans will watch serial liar Curtis squirm as he has to explain to his fiancé Emma why his dad has seemingly returned from the grave, ultimately deceiving her further by dubbing him his stepdad.

Curtis will face a shock of next week’s episodes when his dad does in fact show up for his nuptials, despite having told Emma he had died.

After scrambling to cover is big lie, the pair agree to label him Curtis’ stepdad and hide the revelation from Emma.