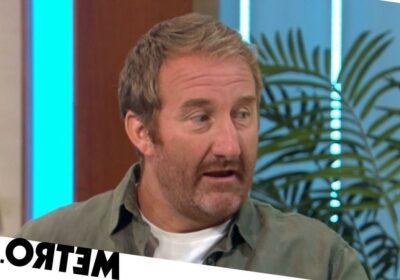 Coronation Street star Jamie Kenna has opened up on his battle with anxiety and depression, revealing that he really suffered in the past before learning to talk about it.

The actor, who plays Phill Whittaker in the ITV soap, appeared on Lorraine on Wednesday to discuss the upcoming dramatic wedding storyline between him and onscreen fiancé Fiz (Jennie McAlpine),

During their chat, Jamie shared his own personal experiences with mental health as host Lorriane Kelly praised him for being ‘so open’.

‘I suffered a few years back now, and I’m a 6 foot 4 burly guy – I’m a big bloke – so I’m typical of that demographic,’ he said. ‘I was brought up in the ‘70s so I wasn’t taught how to talk about it and I wasn’t taught that it was a possibility, and what anxiety is and what panic attacks are.’

He continued: ‘I started suffering when I was in War Horse in the West End and something was happening to me and I didn’t know at it was, and it turns out I was suffering from anxiety and depression.’

Describing himself as ‘suffering in silence’, he added:  ‘It went on for a long time and I kind of silently suffered, and then a few years on I discovered through meditation and various other things that talking about it does literally halve the problem.’

Jamie, who recently revealed an exciting return to the stage, is now hoping to be ‘a bit of a champion’ in encouraging people to discuss their problems.

‘I think there’s a lot of people like me on building sites and in normal, everyday life that don’t know what’s happening and have this fear that’s running through them.

‘And I want to be a bit of a champion to encourage people to talk.’

Right now in Weatherfield, Phill and Fiz are preparing for their wedding, set to take place on Friday.

However, the lead up to the big day has been anything other than smooth sailing, with Tyrone (Alan Halsall) having told Fizz on Monday that he’s still in love with her.

So how will things pan out for the lovebirds, and who will Fiz choose?

Lorraine airs weekdays at 9am on ITV.