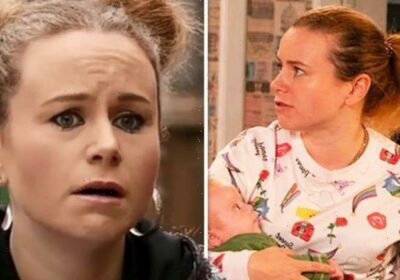 Coronation Street: Corey is found not guilty of Seb's murder

The parents called on Freda for advice when they learnt their son was suitable for the operation.

Freda shared her support for the procedure but warned they shouldn’t see it as a permanent fix.

She urged the pair to not let his hearing impairment impact his future.

The concerned mother dies that’s the case but will she be swayed by Freda’s words?

Gemma was devastated when she discovered one of her children was deaf.

She wants to do everything she can to protect her son and may think a move away will help him.

Gemma may suspect others will agree with Freda and fear he’ll be treated differently after the operation.

The mum-of-four could ask Chesney if he would accept her moving out of Weatherfield temporarily.

One tweeted: “I’m enjoying this BSL storyline. @itvcorrie #Corrie And Freda are right Gemma is a good mum.”

“Great scene, the discussion about Gemma’s deaf kid with all the sign language #Corrie,” another wrote.

“The cochlear implant is the right thing to do for Aled Gemma #Corrie,” another shared.

Someone else said: “I think the Gemma Aled storyline is brilliant #corrie.”

Meanwhile, the ITV soap has confirmed one resident will fall victim to the sinkhole in the Platts’ garden.

“We’ve tried to look at the last 12 months and the limited way in which all soaps have been forced to tell their stories and try to subvert that and go ‘we’re back,’” he continued.

“It’s a statement of intent that we wanted, as a show, to put out there – to make something we couldn’t possibly have made in the past 18 months because the pandemic wouldn’t allow it.

“But we’re back now, our team is the best in the business and we can do it and we’re going to do it and it’s going to be incredibly impressive.

“When you do a story of a certain scale and at a certain level of spectacle, the viewers expect there to be significant aftermath to it and significant outcomes. So yes, I can confirm that Chekhov’s sinkhole will result in a death.”

Coronation Street airs on ITV on Mondays, Wednesdays and Fridays on ITV at 7.30pm.