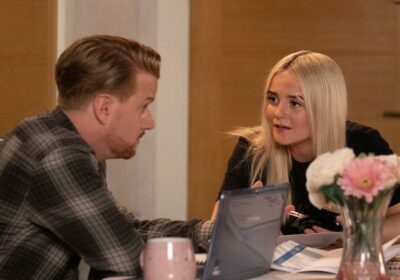 Coronation Street viewers can expect plenty of drama next week as Gary Windass' (Mikey North) killer past finally catches up with him.

With Kelly Neelan (Millie Gibson) by his side, Aadi Alahan (Adam Hussain) blurts out the news to Dev Alahan (Jimmi Harkishin) that they’re planning to get married in Gretna Green.

In shock, Dev rails at Aadi for wanting to chain himself to someone like Kelly.

In a bid to win Dev round and prove how serious they are about one another, Kelly and Aadi decide to throw an engagement party.

Gary advises Dev to accept Aadi and Kelly’s marriage or he could risk losing his son altogether but will the concerned dad listen?

When Gary offers to chip in towards her wedding, Kelly’s overcome by his kindness whilst Maria Windass (Samia Longchambon) masks her concerns.

As Kelly plans the engagement party of all parties with her inheritance, Kelly overhears Maria saying that once the party is out of the way, she’ll get bored with Aadi and ditch him. How will Kelly react?

Gary’s not happy as Sharon Geary (Naomi Cooper-Davis) visits Kelly to celebrate her engagement and begs her not to ruin Kelly’s life by revealing he killed her dad.

However, when Aadi lets slip about Kelly’s kidnap ordeal and then Kelly asks Gary to give her away at the wedding, Sharon’s horrified.

Kelly later receives a holdall of her late mum’s things which she left in Spain.

As she scrolls through a digital camera she’s shocked to see the holiday dated as 17th June 2019, the date her dad was murdered.

Returning home, Kelly shows Gary the photos, asserting she wants to know who really killed her dad. Is the game up for Gary?

Also, Abi Webster (Sally Carman) asks Toyah Habeeb (Georgia Taylor) if she’d like to have Alfie for a couple of hours ahead of her trial.

An emotional Toyah cries over Alfie’s pram, telling him how sorry she is for taking his daddy away.

Back at home, Leanne Battersby (Jane Danson) walks in to hear Toyah confessing to Spider Nugent (Mark Hancock) that she lied to the police, crashed the car on purpose and intended to kill Imran.

Both Spider and Leanne reel, what will they do with Toyah’s confession?

As they head to court Toyah’s a bag of nerves, Leanne begs her not to say something she’ll regret and let her solicitor do the talking.

The prosecution barrister paints her as a murderer and Adam Barlow (Sam Robertson) and Kelly are called as witnesses.

Next, Imran's mum Saira Habeeb (Kim Vithana) tells the court how she saw Toyah kissing Spider and suspects she was having an affair behind her son's back and killed him on purpose.

Leanne does her best to defend her sister but as Toyah listens, awash with guilt, she decides she has to take the stand.

The jury delivers their verdict and Spider announces he intends to stick around as he meets up with DS Swain to discuss his job.

Elsewhere, The Baileys welcome James Bailey (Nathan Graham) home to a pile of get well cards from his fans.

But when County’s Manager calls to talk about James’ future, will he get the all clear to return?