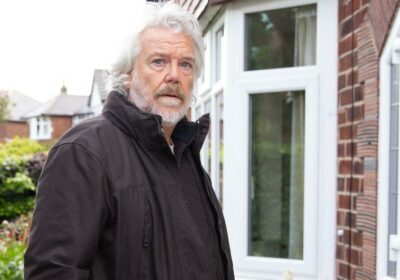 Stu is furious and berates Yasmeen Nazir (Shelley King) for interfering when he discovers that she has found Bridget’s (Beth Wise) address.

But when Kelly urges him to try and make contact with Bridget, Stu decides to give it a try.

Stu arrives at Bridget’s address and knocks on the door but she panics and orders him to leave.

He begs her to hear him out and assures her that he never hurt anyone.

Stu apologises to Yasmeen for snapping and says it was the wrong address but what is he hiding?

Meanwhile at school Jack Webster (Kyran Bowes) is being bullied and called ‘Spanner’ for having two dads who are mechanics.

In the garage, Kevin takes a call from school and heads out with a face like thunder. He's shocked to find out that Jack punched Nathan.

Jack explains how Nathan ridiculed him having found out that Tyrone initially thought he was his Dad.

Realising that Kevin’s got a lot on his plate, Aaron (James Craven) offers to take over the work on Stephen’s car and Kevin’s grateful.

At No.13, Jack rows with Kevin and admits that he’s not looking forward to Abi Webster's (Sally Carman) return as he barely has any time for him as it is.

Chloe the social worker visits Kevin to question him about Abi and Alfie, Jack is sullen as Kevin tries to impress her.

Stephen picks up his car after Aaron fixes it but is soon back shouting the odds as the car breaks down.

As Aaron takes a call and has to rush off Kevin is left to deal with Stephen.

Kevin sets about fixing Stephen’s car but first Jack, then Abi, call his mobile and Stephen threatens to take his business elsewhere.

With the pressure finally getting to him, Kevin loses his temper and picking up a wrench, starts smashing up Stephen’s car.

Abi calls at No.13 and flinging her arms round Kevin, tells him how much she’s looking forward to moving back home.

As Kevin prepares for Abi’s homecoming he is shocked to come face to face with two police officers at the door. Can Kevin keep what happened from Abi?

Also Summer Spellman (Harriet Bibby) tells a disappointed Billy Mayhew (Daniel Brocklebank) that she is definitely not going to Uni and is going to look for a job.

Jacob Hay (Jack James Ryan) offers to put in a good word for her at the factory and Carla Connor (Alison King) interviews her and offers her the job as PA.

A nervous Summer starts work at the factory. Beth Tinker (Lisa George) makes snide remarks while Sally Metcalfe (Sally Dynevor) does her best to put Summer at her ease.

Aaron tells Summer that he was jumped on by some lads on his way home and shows her his bruises leaving Summer shocked.

Summer and Aaron have an evening alone but when Aaron makes a move Summer pushes him away and orders him to leave.

Later Summer meets up with Aaron in Victoria Garden and admits that she really likes him but can’t bear the thought of him seeing her naked body. How will he react?