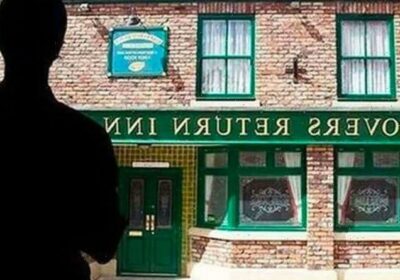 Aggie Bailey star Lorna Laidlaw joined Coronation Street in the summer of 2019, just a few short months before production on the ITV soap was put on pause as a result of the coronavirus pandemic. When the actors and actresses were allowed back on set to resume filming, the Bailey family were put front and centre of an explosive affair storyline which unravelled some secrets of the past and implications for the future of the clan. The matriarch didn’t make a permanent return to the weeknight serial drama for quite a few months, however, which confused fans as Aggie was one of the main characters involved in the life-changing plot.

From July last year to just a couple of months ago, it was written into the show Aggie was working endless hours at the hospital as a nurse on the front line of the pandemic.

It was explained by other members of her family, including husband Ed Bailey (Trevor Michael Georges) and sons James Bailey (Nathan Graham) and Michael Bailey (Ryan Russell) she was isolating in quarantine hotels after coming into contact with patients who tested positive for the illness.

However, at the beginning of the year, her brother-in-law Ronnie Bailey (Vinta Morgan) was introduced to the set-up and it was revealed the pair had slept together before Aggie married Ed.

This led to a catastrophic backlash as Michael was left wondering who his real father was, just as he discovered he was going to welcome a daughter into the world.

To explain her part in the affair and what really happened, the matriarch of the clan appeared via video call instead of being with her family but some light has now been shed on why this happened.

Despite being a major character at the centre of the affair storyline, Aggie star Lorna was shielding with her mother at home.

Although the actress wasn’t classed as being vulnerable, caring for her elderly mother meant she had to take some time away from filming on the cobbles.

Now back on the set and being on-screen with her co-stars again, Lorna explained it feels “great” but added: “I was pleased to dial into the Street via Aggie’s video calls.

“I was supposed to be in these scenes but I was shielding and protecting my mum, so I said to Corrie, ‘Why don’t we just do them over WhatsApp?’

“I did my own make-up and dressed my home to look like a hotel, as Aggie was meant to be isolating following her shifts at the hospital.”

I was shielding and protecting my mum

“Some days it was really hot, so I was wearing my nurse uniform on top of a pair of shorts and flip-flops, as no one was going to see them,” Lorna told Inside Soap Magazine.

However, Aggie’s return to the cobbles comes as the impact of her affair has died down and the focus has shifted to another family drama.

Following the birth of their daughter Gloria, Michael and his ex-girlfriend, Grace Vickers (Kate Spencer) seemed to be getting closer.

The pair slept together in recent scenes and whilst the mother of one was overjoyed at the reunion, the father of her child was more sceptical.

Aggie and Grace have never seen eye-to-eye so the matriarch wasn’t best pleased when she discovered her son was having a baby with Grace, let alone getting back together.

In scenes set to air this week, Grace will learn the truth about Michael’s feelings towards her and her reaction won’t go down smoothly.

Aggie and her husband Ed will return home to find the mother of their granddaughter angrily packing her bags and declaring she is moving to Hull.

This is because she has been offered a job there but the matriarch of the Bailey clan blocks the exit from No.3.

Unfortunately, having learnt the grandparents of her daughter have bought a house at auction and are wanting to renovate it, she says she will only stay if they give her the property.

Pushed into a corner, the husband and wife discuss their options but ultimately agree they must give in to Grace’s demands.

Aggie is less than pleased with being blackmailed by a woman she loathes so will this only escalate the feud between the pair?

Taking to Twitter, fans of the show are pleased to see the matriarch of the Bailey family back on-screen after so long.

One viewer wrote on the social media platform: “Glad to see Aggie not in the phone anymore #Corrie,” with a second posting: “It’s so nice to see Aggie interact more #corrie.”

“It’s weird (and lovely) seeing Aggie in a different set #Corrie, a third remarked whilst a fourth commented: “Aggie back off the phone #corrie.”

A fifth stated: “At least we get to see Lorna Laidlaw for more than one episode! I hope we get to see more Aggie and having her get more acclimated onto the cobbles #Corrie.”

On joining the show in 2019, Lorna teased her character would become a lasting figure on the cobbles and only drama would lie in her wake.

The actress explained why she decided to join the cast: “It wasn’t a particular person, it was the show.

“It’s a big institutional, huge, massive show. You walk on the set and you can’t believe it. You’re in the Rovers!

“Oh my God, I’m in Ken Barlow’s house! It’s constant! Also, I had to keep reminding my brain to not go into African!

“I’ve had an African accent in my mouth [for Doctors] for eight years, and it took me so long to learn those first few weeks as my mouth just did not want to compute. It wanted to go back to default.

“It was just training everything not to be a character you’ve played for eight years. That was difficult.”