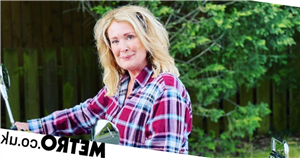 Beverley Callard is looking more Roman Holiday than Coronation Street these days having purchased a Vespa.

The 64-year-old actress, whose final Corrie scenes as Liz McDonald were broadcast last June, announced on Instagram that she wanted to ‘grow old disgracefully’ after buying her Italian scooter.

Posting a picture of herself clutching the Vespa’s handlebars, Callard said: ‘Hello Everyone, I know I’ve been a bit boring and a bit quiet on here recently. Hope everyone is enjoying life now that some restrictions have lifted, we definitely are.

‘@jonmmac55 and I have been on a few little adventures that I’m so excited to share with you soon but for now.. I wanted to show you this… growing old disgracefully.’

Since leaving Corrie, Callard has featured on ITV’s I’m a Celebrity…Get Me Out of Here! where she famously revealed that her nickname for husband Jon McEwan is ‘megashag’.

The soap veteran also said recently that she wouldn’t be surprised if Coronation Street bosses decided to kill Liz off in her absence.

Callard told the Mirror: I think Liz may well die. They did say when I handed my notice in: ‘We’re not going to kill Liz, we do want you to come back.

‘But now I’ve made that decision I don’t want to go back, they may kill her off screen.’

Let’s hope the writers don’t take such drastic action. After all, with the Rovers Return going up for sale this summer, wouldn’t it be a treat to see Liz rock back up on a Vespa, having bought the pub? Wearing a leopard-skin crash helmet, naturally…