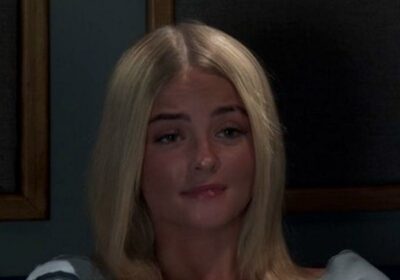 Coronation Street fans have spotted a vital piece of evidence to save Kelly Neelan after she was wrongly questioned for "vandalising" Dev Alahan's new car on Tuesday's hour-long episode.

During the latest instalment, Dev's son, Aadi, who has been struggling since his father pulled sister Asha out of their burning vehicle before him during stunt week, decided to lash out.

After his father shot down his dreams of moving to London for an apprenticeship and instead offering him a role as general manager for three of his businesses, Aadi decided to get drunk by taking booze from the shop.

And in another attempt to get pay back at his father, Aadi decided to vandalise his brand new car while he later told Summer Spellman that he wished his dad had died.

However, despite being responsible for the vandalism, it was Kelly, who was recently released from prison after wrongly being sent down for Seb Franklin's murder, that was questioned.

Kelly insisted that she wasn't responsible as she had been in York all day with a friend, and when this pal refused to confirm her statement, the character was left in trouble.

While the episode ended with Summer asking Aadi if he knew or had seen anything to do with his dad's car getting damaged, to which he lied saying: "No, first I've heard of it."

Soap watchers were quick to point out a piece of vital evidence that would save Kelly and prove Aadi vandalised Dev's car as they questioned why the police weren't checking CCTV.

A different account put: "Isnt there CCTV outside the shop ?#Corrie."

While another follower pointed out that even if Dev doesn't have security cameras, there will have been CCTV footage in York to prove Kelly's whereabouts.

While another fan added: "All Kelly needs to tell the Police is the make of the car and what time they went. They'll be able to see it on CCTV #corrie."

For all your updates on Coronation Street, sign up to our daily OK! newsletter.