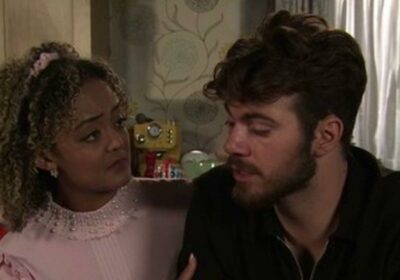 Coronation Street fans have been left fearing for their favourite Emma Brooker after she gave new fiancé Curtis Delamere a large sum of money.

On Friday's episode, Emma's father Steve McDonald kindly gave her some of his savings so she could help partner Curtis, who has a "life-threatening" heart condition, see a top specialist.

It comes after the couple got engaged earlier this week following a whirlwind romance and they are now planning for a Christmas wedding.

During the latest instalment, Steve asked Tracy Barlow whether he could use some of their personal savings to help out Curtis, to which she made her thoughts very clear.

However, Steve decided to go through with the gesture anyway and later in the episode he told delighted daughter Emma: "I wanted to pay for him to see the specialist."

To which Emma vowed to pay him back but he insisted: "You don't have to, call it an early wedding present."

After telling Curtis the good news, he broke down in tears and admitted: "Just can’t believe how much you and your family have done for me, you barely even know me!"

And despite there being no proof of Curtis having any sinister intentions, it hasn't stopped soap fans worrying that he could be a "con man" and that he will do a runner with the money.

Taking to Twitter, viewers shared their theories as they feared for their soap favourite Emma and even claimed that Curtis getting emotional could be down to "guilt".

One person said: "Emma deserves some happiness and I don’t trust Curtis. I think he might be a con artist #Corrie."

A different account put: "#Corrie I wonder if Curtis has only asked Emma to marry him to con money from Steve."

Another follower commented: "So Curtis is a Con-artist right? #Corrie @itvcorrie."

A different viewer wrote: "This Curtis bloke gonna scam Steve out of his money. #corrie."

Another show watcher put: "I think there's nothing wrong with Curtis & he's playing Emma for the money & does a runner! #Corrie."

While a different fan added: "I really love Curtis but there’s something about him that’s not sitting right with me… #Corrie"

For all your updates on Coronation Street, sign up to our daily OK! newsletter.